by KJ in #AmReading

Full disclosure: I’m very, very leery of books that an English teacher might force me to read in some imaginary English class that I haven’t been in in decades. As a general rule, you say “literary” and I say “leaving now.” I’m afraid, and I’ve been burned, by protagonists who won’t learn, entire books peopled with characters I wouldn’t even get a sip of beer with and writers who seem to have entered a competition to see who can create the most depressing life and leave everyone stuck in it. It’s not that I question whether those are “good” books–I get it. They’re good. They’re notable, they’re thought-provoking, they’re challenging… it’s just that that’s not usually what I’m looking for in a book. So normally a label like “National Book Award Winner” makes me duck and cover in the Romance section or maybe under the Science Fiction and Fantasy table. But Interior Chinatown… everyone said it was funny. And a Hollywood satire. And his last book was called “How to Live Safely in a Science Fictional Universe, and he was compared to Kurt Vonnegut and Douglas Adams. So, okay, they kinda had me at Douglas Adams… and yes. This book is funny–and thought-provoking, and challenging, and notable all in ways that worked for me and did not ever, once, trigger flashbacks to being unable to figure out the “theme” of The Red Badge of Courage. (Thank you, Charles Yu, for hiding that one in plain sight.) If, like me, you hesitate to go in for the “big books of the year” you should still pick this one up and try a few pages. It’s odd and demanding and intriguing and heart-breaking and funny, all in a pretty wonderful way. 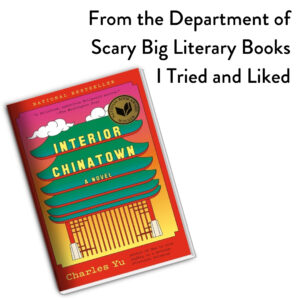