What Lily Does on a Rainy Day

by KJ in Life in a Northern Town, Parenting on Track, Raising Devils Lily has crafty instincts in more ways than one. By all rights, today should have been soccer. Normally, we play soccer in the rain around here. We do not let a little 50 degree weather or drizzle stop us! In fact, we have, and have had since Sam was this age and playing in this particular soccer (a spring fundraiser for the Dartmouth men’s and women’s soccer teams), special soccer gloves.

But the field was not. The field was wet and muddy after a long day of not-exactly-drizzle style rain (although not really ark-worthy, either) and I was pretty happy to see the email cancelling (all of two hours before we were supposed to go, and whether that’s because everyone in the world is supposed to have a mobile phone, or because the given assumption here is that a parent will be the one taking you to soccer (not actually a mom, it’s probably about 80-20 with soccer) as opposed to a babysitter or a carpool, I don’t know. Last week, it was indeed a babysitter taking Lily, Wyatt, Rory and Lily’s buddy B to soccer. But this week, it was me. Or would have been. And I was all revved to sit in the damp and cold and watch! I totally was! I was not even thinking of bagging and spending the afternoon at home, because what kind of an example would that set, to let a little wet stop you when we have special gloves and everything!

But they cancelled. And Lily, Wyatt, Rory and B entertained themselves, with no help from me, all afternoon in the basement. I was working on something, and I could hear Lily’s dulcet tones drifting up periodically through the heater vent.

“But when I ask you to do something I expect you to DO IT!”

I do not know where she got that last one, not at all.

But eventually, after B went home, Lily emerged with three “backpacks” made by her, her pile of felt and her fantastic little low-heat glue gun (which it occurs to me I should go make sure is unplugged). This one’s hers, and she’s pretty miffed that her homework folder won’t fit in it.

Crafty is Lily’s thing. She’ll scrapbook any time I’ll get the stuff out: 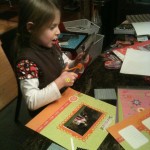 And who can forget her Valentines? Certainly not her classmates. Or, probably, their parents. 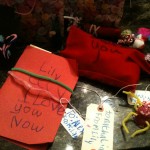 We don’t spend a whole lot of time worrying that she’s not sufficiently creative.

But what I do worry about is that they’re not really getting the hang of this whole “contributions” thing–which around here we call jobs. Indeed, everyone has jobs–the personal jobs of packing and unpacking one’s lunch daily, and putting one’s own things away, and one’s laundry, etc., and the larger job–dinner helper, say, or trash-taker-outer. And they do do these jobs, without a WHOLE lot of complaint–but only if reminded. And kind of slapdash and half-assed. We are often so busy that on some nights there really isn’t time for jobs, or even to do your own lunch, and it seems to me that on the one hand, they need their sleep. (Because it’s healthier for them, and they’ll do better in school. Really. It isn’t because if they’re still awake after 8:30 I begin to slowly start plucking out my own eyelashes.) But on the other hand, they should know that some things, you have to do know matter what. And they should know how to do the things, and not be completely stymied by the idea of figuring out how to wipe a counter with crumbs on it without resorting, minutes later, to the vacuum.

So tonight presented a good opportunity for that form of training. Plus we have ants, which, history suggests, will soon be followed by the fruit flies (must be Spring!) both of which always inspire in me great heights of clean countertops and even greater use of bleach wipes and whatnot. And tomorrow, which features only one brief activity for one child and should have us all home shiny and happy by 4:45, could be another! We could go on, actually managing to have the kids actually do what are meant to be daily chores!