by KJ in Change, Raising Devils

It must be spring, because amidst all of the outside activities and the going outside and the going back outside comes… cleaning. Sort of. At a very low key. I have a pretty high tolerance for the debris level in our house at the moment, because while dealing with itâ€”putting, say, the hockey bags away for the yearâ€”would give me a pleasant high and offer some lasting pleasure, it would have to come at the expense of other things , and right now my life is chockful of things I either love to do or have to do, and putting away hockey bags doesn’t quite get there.

I’m not sure where straightening the kids’ closet fits into that. I didn’t exactly clean them, but a fair amount of outgrown clothing was removed, and new clothes, particularly for Lily, were added. Winter clothes were moved to the back and everything just generally loosened up, and in the end, it still didn’t look so hot. Rory and Lily’s half of the closet (all of the kid clothes live in one large sort of double sized wall closet) looked like this: 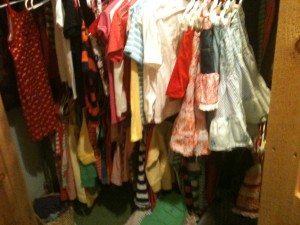 Lily and Rory's half of the closet, take one.

That really doesn’t look like an improvement, does it? Lily didn’t think so, either. And apparently 6 is old enough to get the spring cleaning urge, because she took a look and came trotting downstairs. “Do you remember,” she asked, “that you said that when we switched out the winter clothes, we could move all of my clothes to the dresser and leave Rory’s in the closet? So we don’t have to share? Because it really gets crowded and in the morning? Rory? She lays on the bottom of the closet and rolls around so I can’t get my clothes! And then she laughs and says ha ha you can’t get your clothes!”

This is why if a wolf ever tries to eat Lily’s sheep, the sheep are doomed. Rory, who is rarely even awake when Lily gets dressed, does no such thing. And I did not remember. And this sounded like work. I had just done work. I was all done doing work. No, I said. I don’t remember (although I kind of did). And your clothes won’t all fit. (It’s a three-drawer changing table with a little hanging cabinet.)

“Yes,” said Lily, “yes they will! And I will do it!” Lily is finally starting to recognize that if I give a reason with a no, it probably isn’t really the reason.l The reason usually amounts to nothing more than “I don’t want to.”

I agreed that we could move the clothes if she would do it. 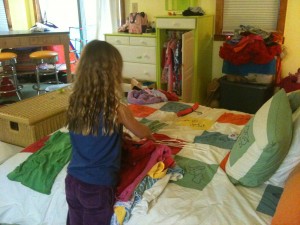 I helped a little. And then I got into it, and it seemed like we could make it better, and so Rory ended up with this: 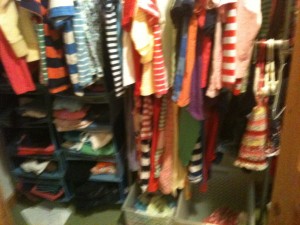 Rory's half of the closet, take two. 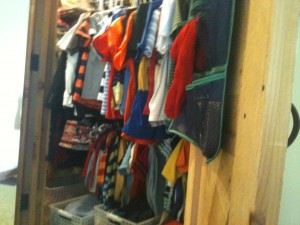 Sam and Wyatt's half of the closet.

And I moved even more of Sam and Wyatt’s clothes to the backâ€”they don’t need all of their long sleeves out even though it can get cold here in the summerâ€”and that was better for them, too. (You’re looking through to Rory’s side, and there’s a mirror on the open door.)

And Lily ended up with this: 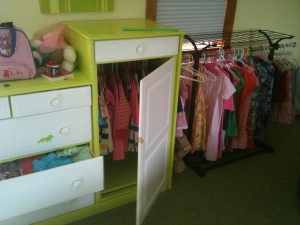 We had the hanging rack. When the kids were younger, I used to put all their clothes out for the week in hanging sweater boxes (two of them are in Rory’s closet now), and they hung on this rack in the bathroom. I love repurposing stuff. I got a box for Sam’s shorts by using the sweater racks for Rory’s shorts, too. I had thought I needed to go shopping for a little closet organizing stuff today, but we had enough to make do.

What I really want to get to is my closet. But this has been hanging over me. It actually does have to be done, otherwise no one can put the clothes away. The closet obviously isn’t very big and it gets packed if I put, say, the new hand-me-downs in for Rory or Wyatt without pulling the stuff they’ve outgrown. It’s not a chore I mind, but it’s not one I look forward to, either, and I’m glad it’s done.

Lily is clearly ready for a space of her own. This every-body-shares-a-room thing (this is the guest room, with the clothes in it) has been fantastic in some ways, but both Lily and Rory, far more than Sam or Wyatt, want to be able to go put their own things in their own space. Rory I gave one of those little folding huts for Christmas. I’ve tried a couple of things for Lily–giving her a storage closet for a hideout and setting up a desk–but neither has taken. What I’m getting, loud and clear, is that she wants to have her own place to set up the way she wants. Time, I think, to make some changes.