A Perfect Afternoon; or, Why Activities Are Bad; or Spaghetti Zucchini Carbonara: Yum!

by KJ in Feeding the Devils, In my garden, Raising Devils

All children were successfully picked up after what must have been a successful day at school. Wyatt needed a few minutes of snuggling, which no other child objected to my granting. Music Teacher extraordinaire arrived, and music commenced. Homework was voluntarily embarked on. There was some bickering over the homework table, where the children without homework were doing mazes, loudly and competitively, because some children can do anything loudly and competitively. I explained to Sam why if you had a square foot to be filled with 6 inch square tiles, you would need 4 tiles, not two.

And then it was time to contemplate dinner. Dinner was planned. Dinner was on the iCal: Spaghetti Carbonara. With home-made noodles, because later this week, I’ll be bringing ravioli to Lily’s classroom for her “unique week” and although I have filling in the freezer, I needed to make the dough, and so why not make extra for dinner?

But Spaghetti Carbonara, while delicious and a perfect use for the three pieces of bacon I had in the fridge, seemed a little lacking in green stuff. And while I’d planned a salad, I found myself uninspired. I thought about raiding the garden for cherry tomatoes for Spaghetti Tomato Carbonara, but we’ve eaten a mighty lot of cherry tomatoes lately. But thinking of the garden led me, as it does many gardeners this time of year, to think of zucchini. Heck, zucchini is an honest italian veggie. At first, I thought I’d sautÃ© it up and serve it next to the Carbonara, but that seemed so uninteresting. And so Spaghetti Zucchini Carbonara was born. Clearly you could call it Zucchini Spaghetti Carbonara, or Spaghetti Carbonara Zucchini. I’m flexible. Whatever you call it, it was delicious, and if you have a few zucchini around the house (and if you don’t, ask a gardening neighbor and you soon will), I highly recommend it. Yes, I martha stewarded my own noodles, but you needn’t. It would be just as delicious without. I suggest fusili. 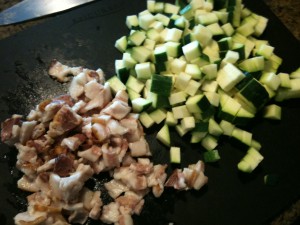 Chopped bacon, diced zucchini: I was going for the same general size.

First, I chopped the zucchini and the bacon into bite sized pieces (keeping in mind that I could expect major shrinkage from the bacon). I used only one zucchini. Next time I’ll use two, as zucchini turns out to do some major shrinking here, too. 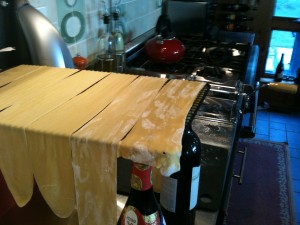 Floury pasta sheets. My dough was a little sticky.

Well, no, actually first I made pasta dough and rolled it out, which you can, if you really want to, see in more detail here. But we’ve already agreed that you’re using fusili. Next week, I’m using fusili. 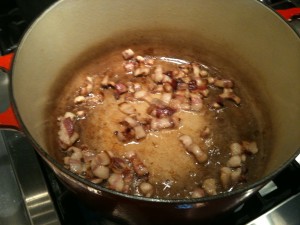 I cooked it on low, because my burners run way too hot.

First I cooked up the bacon about half way to crisp. It let out lots of good bacon fat, perfect for when I added the zucchini. I cook it on low–burning it would taint the whole thing, and I am an impatient cook who often burns bacon. Not today! Probably on a regular stove, as opposed to an insane fire-breathing behemoth with burners that send flames shooting out to get you, medium would be about right.

By the way I really need a stove repair person. 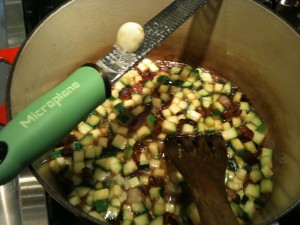 I love the microplane for grating garlic.

I dumped in the zucchini–again, next time I’ll use twice as much–and let’s don’t kid ourselves, that stuff fried right up. “SautÃ©” my ass. I grated in two big cloves of garlic and, when the bacon and zucchini looked delicious, deglazed the lot with about 1/3 cup of wine. I did not measure the wine. Think a couple good glugs. Certainly not more than half a cup and I think a little less. 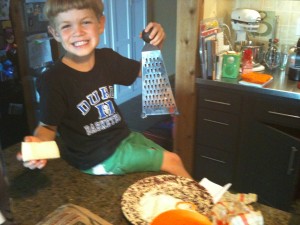 First time for this big boy job with the grater "which could really cut a tomato in half really it could." 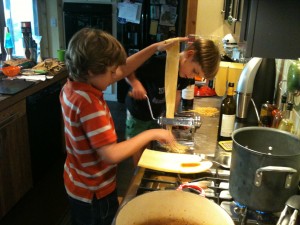 Pros. WIth a stepstool.

Meanwhile my sous chefs grated cheese and put the pasta through the spaghetti cutter. It’s the first time I’ve pretty much left them to it, and it mostly worked out. Some of it was kinda stuck together, and some of it was on the floor for a bit, but hey, it gets boiled. In nice salty water, btw. That’s true of the fusili too. Really really salty water. 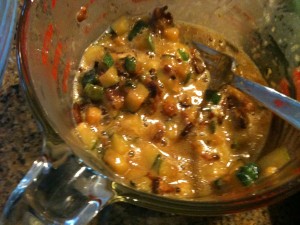 Next, I cracked one egg into a pyrex and whisked it up with a cup or a little less of grated parmesan cheese.. I let the bacon/wine/zucchini/garlic cool a little, and then I whisked it into the egg/parmesan. The idea is that it cooks the egg up into a creamy sauce. You don’t want to add the egg to the pan, though, or you will have zucchini bacon wine garlic scrambled egg. If you do it in a cool pyrex (or any bowl, including your serving bowl–less dishes!) you’ll be fine. You won’t, however, be able to take a picture while you do it. Unless you have three arms, in which case you really should take a picture of that. I have to say it doesn’t look nearly as good as it tasted.

Actually I forgot the parmesan and added after, but that’s how I usually do it. Or you could add it after. This methodology is all courtesy of Cook’s Illustrated, btw, although it’s years since I actually looked at the recipe. 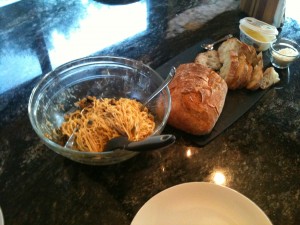 Serve with bread and butter and more cheese. And maybe a salad, but I didn't.

This was really so, so good, and it wasn’t because of the pasta–in fact, a more rugged pasta would actually be better in many ways. And everyone ate it, although two customers did pick out their zucchini, and a third picked his out, and then ate it that way–but no one actually objected to it, and I’ll bet after I make it a few dozen more times they’ll eat the whole thing. I loved it.