I Woke Up Grumpy, So I Dragged Everyone Else Down, Too.

I woke up on the wrong side of the bed this morning.

Really, I got in on the wrong side too. I went to bed chewing over a worry that just won’t quit, turning it over, massaging it, analyzing it, angsting over it. And, not surprisingly, when I woke up the worry was right there, basically stuck in my hair like gum. Maybe I should feel grateful that I didn’t choke on it.

My theory, going to bed grumpy last night, was that this morning would go better if I didn’t set an alarm. I always wake up when my husband wakes up, and I thought life without one of the iPhone’s many horrible ways of yanking me from sleep would be an improvement. You already know what happened. I did get up, and I was plugging along through my morning routine when my husband came in, looked at me oddly, and said “what are you doing?”

“Looking for a bra,” I snapped. I would have thought that was obvious. Bra found and covered in a t-shirt, I checked the time and found the explanation for his confusion–it was 6:55, and we usually leave the house at 7.

It wasn’t so bad, I guess. I didn’t yell. But I grumped and scolded and lectured and very quickly turned one child in a happy mood, and the other in a “well at least it’s Friday” mood, into two children who were grumping and picking at one another about nothing (my oldest son got a ride to the bus with my husband, and my older daughter–who would have saved me by getting things rolling and possibly even coming in and waking me up–is on a school trip).

The car quickly filled with “you always” and “well you never” and before long my younger daughter had gone to where she always goes when she is upset but doesn’t have any thing to be upset about, which is “I have to get shots at my next doctor’s appointment” with a bonus “and so do you, so you will not have a happy birthday,” and they were just about to sail off into the great world of “I’m unhappy and I meed to make you unhappy too” when I pulled the car off the road.

Why have I not yet learned that my cranky is incredibly contagious? I’ve even written about it, twice, in 2013. I know better. I even know there’s research confirming the ways moods spread: images of strong emotions were significantly, specifically and repeatedly evoked in the viewer, and in the broader sense, both happiness and sadness have been shown to circulate through social networks in a manner similar to disease. Maybe that’s even part of my problem—-my social networks are like a pack of frustrated toddlers caught in an endless game of peek-a-boo when all we really want is to get it over with and take a nap, and presumably will stay that way into November. And oh, the date–this bit of September may always be hard to get through. There’s some excuse for my mood. But why do I let this happen, and while we’re at it, why do I pick up my pet worry and take it to bed with me when perhaps the one thing I know for certain about the little rat is that I will not solve it in my dreams?

Damn it, I know so much. This is in so many ways not my first rodeo. I know how my own brain works and what keeps me up at night. I know how my kids will respond to me. I know how we get from point A to point B to arguing about future tetanus shots. I know, and yet I just can’t seem to put a spoke in my endlessly turning wheels. I could have written the script for this morning before I even closed my eyes last night, and yet I let it happen.

There were no tears.

When I pulled the car over, I didn’t get out and rage, or drive wildly home and insist that I was not taking them anywhere until they stopped bickering, ever.

We’re doing this to each other, I said. I started it. I woke up cranky and I tried to keep it to myself but I didn’t quite manage it. Now you guys are doing it–you’re looking for ways to make each other unhappy because you’re feeling unhappy. And now is when we can choose—-is this the day we want to have, or do we want to find some happy? I’m going to find us a good song, I said, grabbing my phone, and we can try to use it to get things going better.

Then, because this is real life, my iPhone wouldn’t give me a song because it wants to get all its music from the cloud now and we were on a road where there’s no signal.

And one kid said “I won’t be happy if I’m late for school.”

And the other said “Would you just turn around and drive?”

So, at least, I did. With no music, but with no commentary, either. And after a while one said “do you think Daddy will help me lower the seat of that road bike so I can ride it this weekend?” And I said yes, and we talked about an upcoming bike ride, and the other sat silently, but really silently, not that fuming, grunting, poking silence that just begs for everyone to start back up again, but just silently.

And when they got out of the car they smiled and waved, even the silent one, and I hope they’re having the day they would have had, whatever that is.

And me? I’m here. Trying to make sense of things, trying to apply what I’ve learned with one half of my brain to the more resistant half. If I look at my morning with some self-compassion, as Susan David suggests in her book “Emotional Agility: Get Unstuck, Embrace Change, and Thrive in Work and Life,” I did better this morning than I have before. The “emotional super villains” I described deploying against my family and myself in 2013 (“Black Mood, capable of bringing an entire family to its knees with a single stormy glare,” Guilt Ray, Irrational Accuser, Sleepless Screamer) were absent. Things were just … not good. Heading towards the dumpster, yes, but we never actually got there. That’s progress.

As for my root cause–my worry–isn’t there always one of those? Some part of our mind is always turning over and over, saying, I don’t know what to do about my relationship, or my job, or my mother, or this symptom, or this child. I can’t decide unless I know this, or if only I’d done this, or what if I’m right about this or wrong about that? If only he would … if only she would…What if I …

If I weren’t worrying about the one thing, I’d be worrying about another. In “The Not-So-Big Life,” Sarah Susanka writes that most of the time, “there is nothing wrong.” Our worries, the ones we take to bed and cuddle up to at night—-at that moment, they’re not there at all unless we invite them. Now, sometimes you have to sit down and think and make a decision, but that’s far from what I was doing, not last night, and not this morning, either. I was just rehashing the problem itself over and over again in my head, and no matter how big the problem, that in itself does nothing.

I know I worry. I also know I can put even the hardest things—-even the medical test results, even the lay-offs looming, even the personal let-downs (none of which are my current worry)–aside and let something else take over. I can do some hard work, or read a good book, or play a game with a kid, or just cook dinner and hang out, if I both try hard enough, and, perversely, don’t try at all.

There’s this place where repeating “I have done everything I can about this now” meets “and now I can allow myself to do nothing” and becomes the right space for your worry. You’ve afforded it the respect and attention it deserved, whatever that is (and as someone who has been known to perseverate over a child’s Pokemon Go account, sometimes it’s not much) and you get to not do it right now. The worry, and all of the what-ifs and if-onlies, will still be there if you need them.

I’m learning that, slowly. But at night, when my defenses are down, sometimes I hop right back into the cycle.

Tonight I won’t. Today I won’t. I can predict what will happen, and I can predict, too, that the result won’t make me or mine any happier–whereas there’s a whole lot going on this weekend, from a bike ride to a horseback riding clinic to family picnics, that will make me happier if I just let it.

So, a little compassion for me today, a little licking of the wounds, a little indulgence. The same for my kids, if they need it.

I was trying to self-medicate with a slice of chocolate zucchini cake that Jessica Lahey brought over, but I left it on a plate while I got up to get the books I wanted to tell you about, and the dog ate it.

I could have predicted that, too. 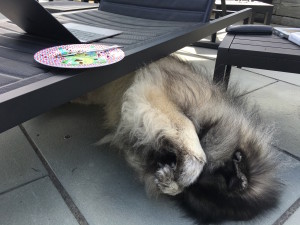 There’s no reason why it can’t still be a good day.

By the way, I’m working (or should be) on a great guide to scheduling kids’ sports and activities–and I’ve already put together a Back to School Survival Kit. Subscribe here, and the scheduling advice will arrive soon, while the survival kit will drop immediately into your world via the magic of the internet.