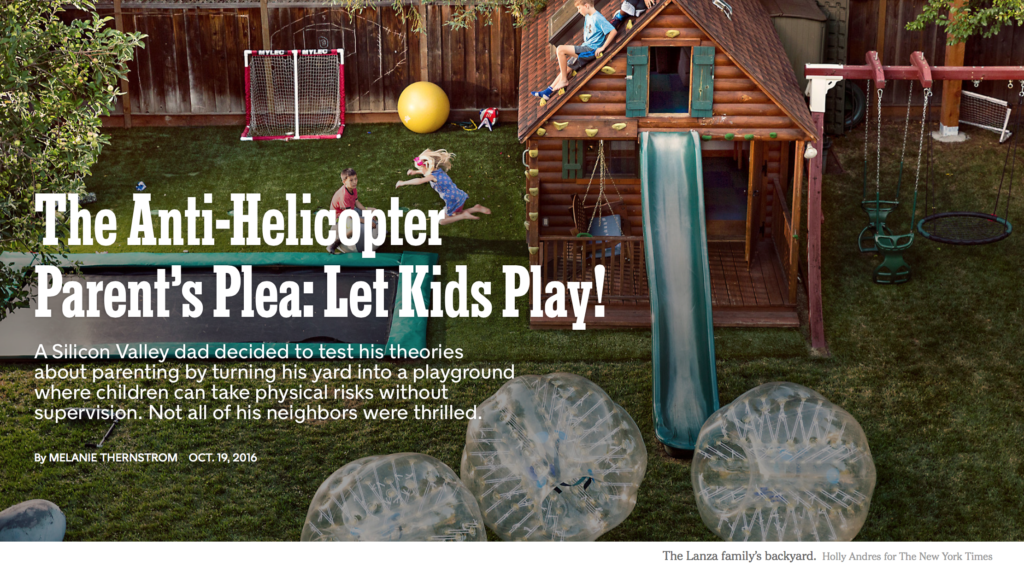 Have you read the piece in the New York Times Magazine about “The Anti-Helicopter Parent” and his incredible backyard/neighborhood play space?

It sounds—and looks, as you can see in the image above—amazing. In addition to what you see there, there’s a picnic table in the front yard, a movie screen on the fence and art installations that do everything from offer water for passing dogs to providing quotes to encourage kids to play. (As you will gather, the Anti-Helicoptering Parent is also a Silicon Valley success story). He calls it the “Playborhood.”

In the house, there’s more, including easy and not discouraged access to the roof of the two-story dwelling. It’s an ordinary roof, slanted, with, at least according to the story’s author and the Anti-Helicoptering Parent’s dubious neighbor, a potentially deadly drop.

The dad’s pitch: boys need the freedom to take risks and to play unsupervised. (Yes, he apparently said boys. As he has three sons and no daughters, that could just be a thoughtless oversight.) He’s supported by research, noted in the article, that children need to learn how to take and evaluate physical risks and deal with uncertain situations. When we protect them from those opportunities, as we currently too often do, we deprive them of the chance to learn the judgment they need.

In many ways, that’s the argument of some other wonderful articles about playspaces, like Hanna Rosin’s “The Overprotected Kid“about a playground called “The Land” in Wales, where kids light fires, jump on abandoned mattresses and build structures from pallets.

I loved the idea of The Land, but something bothered me about The Playborhood. At first glance, it seemed so similar. The physical risks were there, and some of the ethos was the same—and one thing The Playborhood had going for it was an accurate assessment of the need to get some kids outside so more kids will go outside. In most neighborhoods, there’s no one hanging out, ready to kick a ball with or draw on the sidewalk with or create a game with–all the kids are off at organized soccer or art classes, or if they’re not, everyone thinks they are. Creating a way to draw the neighborhood kids outside is enviable genius.

But that playspace, fantastic though it is, isn’t quite doing the other half of the job.

Look at it this way: let’s say that during your unsupervised ’70s childhood, you noticed something, while playing in a friend’s yard on the trampoline with the bare springs that tended to bounce up on from the ground one side if you jumped on it too far from the middle. That trampoline was located conveniently close to the roof outside your friend’s bedroom window.  You could pull it over a few feet, open the window, crawl out, and jump off, achieving trampoline heights never before seen on the block.

Before you even brought this flash of insight up to your friends, you’d know two things: first, the grown-ups would think this was a terrible idea, and second, none of them must ever, ever know.

What happened next would vary. Maybe you’d toss the idea out there, and a friend would talk you out of it, or it would prove unachievable due to the trampoline being harder to move than you’d thought, or your friend’s stuck window screen. Or maybe you’d all talk it over and you’d change your mind yourself, or even get as far as standing on the roof before bravely chickening out (not that it would seem brave at the time). Or maybe it would work, and no one would get hurt, and you’re repeat it at every opportunity all summer long and only tell your parents about it years later, over beers, during your last year of graduate school. Or maybe it would work, and someone would get hurt, and all the parents would line up the culprits later, after the ambulance sirens had faded, for a massive lecture on stupidity and safety.

None of that last paragraph happens in the backyard you see above. For those kids, the adults have assessed the risk. One, at least, has endorsed it. In fact, adults have created it, with heavy equipment and machinery and checkbooks. How hard do you have to think before you jump?

Some, I’d guess, but it’s more akin to the leap from a high dive than it is to evaluating a dangerous situation, although you can see that there’s risk and skill involved in doing it successfully. The same goes for the roof of the house, where climbing seems to be tacitly allowed if not encouraged, and there the risks seem very real—but given all the surrounding facts, it’s worth wondering how much time the kids spend evaluating them.

That’s true of The Land, too, possibly–at the very least, the whole “my parents would kill me” risk is absent. But the Playborhood is very much a managed, created, artificial space, and while the  parent who created it may not be helicoptering, it sounds like he’s hovering just the same–only instead of saying “be careful,” he’s saying “jump.”

I do think that’s a better message than most. And given that they’re in Silicon Valley, where wild space is largely inaccessible to a kid and where most neighborhoods are empty after school, The Playborhood sounds like a neighborhood to choose, and the Anti-Helicopter Parent a neighbor to largely embrace. Kids biking to school, playing in the street, running from house to house? Sign me up.

But if my kids could play there, I’d tell them in no uncertain terms to stay off that roof. I’d threaten them and nag them and describe dire results.

I wouldn’t necessarily expect them to obey me. But I’d want to be sure that if they chose not to, it wasn’t because they thought I was cool with the whole 25-foot-drop thing. I’d want it to be because they’d fully thought out the risks for themselves.