When Homework Engulfs the Whole House 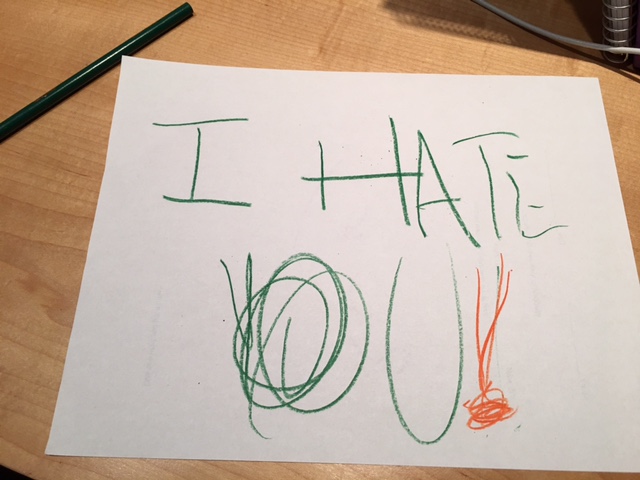 Drafted at some point during last night’s drama. Or possibly this morning’s. I’m not sure who it’s directed at.

Last year, amidst great emotional difficulty, my younger daughter learned to divide with a remainder.

Let me just be clear on how hard this was, how utterly wrong, how singularly contrary to every idea she had ever formed about math. Math was performed with whole numbers. Math is finding a single right answer. If the two numbers with which you have been presented do not come together in the operation you have been instructed to perform and produce an answer in the form of one of the numbers with which you generally do math, then you must be wrong and you need to erase everything—possibly the entire paper—and start again.

Remainders did not fit that model. They were not tidy. They did not allow you to feel secure in your answer. They caused stress and misery, like unloved clutter on a countertop.

But, after many months of struggle, she accepted remainders. (In a similar process, it took years—actual years—to accept subtraction after she learned addition. That was simply not what you did with those symbols. You added. Period. Consistency is her watchword.)

Sadly, this year brought with it fractions. If Suzi has 10 apples and three friends and they all want to share the apples equally, how many apples does each get? Not 2 with a remainder of 2 apples in the bowl. Nope. 2 1/2 apples.

That may make sense if you’re eating actual apples, but not on a page of math homework, my friend. That’s just WRONG. Bitterly, horribly, painfully wrong. Because it is crystal clear to anyone who knows how to divide with a remainder that the answer is 2 with a remainder of two. She is wiling to add fractions, in a pinch. Even subtract them. I do know actually know if she has multiplied them; if she has, it occurred without incident. But mess with her division, and you have messed with the wrong girl.

It feels as if this drama has been going on for months, but it’s really only been a little over a week, and it goes like this. At first, she’d take her page of homework, work her way through the word problems (which are already really hard for her, as her gut instinct—understandable, given her existing learning challenges—is still to skip all the pesky words, pile up all the numeric symbols and add them to produce an answer) using division with remainders, then hit a road block in one of the words and ask for help. The person she asked, whether it was a parent or a sibling, would explain the word, help with any reading challenges the problem presented, then glance at the other problems, as you do, and say, gently or not depending on individual temperament: Those are wrong. They’re supposed to be fractions. Fine then, she would say, I need help.

I won’t go into detail on the combined efforts of myself and three siblings to explain the fractions–the idea that the number of people who would eat the apples went on the bottom, and the number of apples being eaten, or divided, went on the top and became a fraction. I should probably mention that it all caused flashbacks regarding last year’s initial introduction of fractions in the first place, the endless slicing of apples and halving of cookies and the turning of every arrival of pizza in a box into an unwanted math lesson. This child actually likes the number part of math—it’s so clear and tidy and there are actual right answers —but she was and is totally fraction resistant, probably because fractions are a concept that involves too many words. We’d start talking, and by the time we’d get to “you’re dividing by the number of kids” her eyes had glazed over and we could tell she’d thrown up the mental wall. No kids, please, in math. Just the numbers. Can we not have just the numbers?

Note, too, that if you hold the person explaining the problem there long enough, and refuse to understand firmly enough, the person will eventually be forced, through sheer attrition, to reduce the problem to just the numbers for you. Because that’s the only way to explain. But by the tenth or fifteenth time you’ve “helped” in this way, even if you’re only 10, you eventually notice that you’re being manipulated and refuse to play. Because you’ve explained it. So has everyone else in the house. Enough times that anyone who can understand it should understand it. And we all know she can understand it. Almost certainly already does understand it, and could probably do it easily, as the math part is designedly easy, if she should just stop screaming at the person trying to help that she does not understand, never will understand, cannot do it this way and HAS to have a remainder. We’ve been down this road before. (And even the full on learning disability testing road–that’s all covered. This is not that problem.)

Eventually my husband took over with some success, because he would explain the problem, then write out three identical problems and stand over her and insist that she do them the way they’d done the first. He would write out the steps. He would point her back to the original problem and say, just change the numbers and do this. Now do it again. And again. And again. He outlasted her, bless him, and faced with the prospect of doing three times as much homework, she sort of accepted the fractions, and kind of absorbed a little of it. So now we had proof—she theoretically could get through the homework herself.

But–and here we finally get to the problem–she doesn’t want to. So every night, when she opens her math homework, the drama begins. “I need help. I can’t do this.” The volume increases as she works her way through everyone in the house other than her father. No one will help her, and this is an outrage. She needs help, after all. What kind of family does not help a child who needs help with her homework? And she does not want Daddy’s help, and yeah, we all know why.

We recite what the school has told us to say, which is that if she doesn’t understand it, she can ask her teacher tomorrow. BUT SHE HAS TO DO HER HOMEWORK. Remember, this is a tidy child. Who, it should be said, wants to do her homework because it really bothers her to leave it undone. And who, it should also be said, does not like to lose these battles of will, over getting help, and whether it has to be done tonight. And the whole thing cascades, as it has done every fall for the past four years, until all reason is lost. And because she started with her math, now she’s too upset to do any other homework without asking for help, and then yelling at the helper because the helper will not let her produce, instead of the history we are willing to help with, the dreaded page of fraction word problems.

It does not take long for this process to reduce the whole house to misery. There is stomping. There is grunting. There is this fun process in which every pencil mark on the page is punctuated by a sort of a shrieked “uh” that is impossible to reproduce on the page. We can stop it, with dire threats, but this is a child who must be threatened only very carefully, because about fifty percent of the time she’ll make you follow through. And then we’ve only stopped the sounds. The emotional fury persists, and does not abate, and lasts through a sulky bedtime. It’s usually gone in the morning, until, after school, the whole process starts again.

I know we are not the only family for whom homework isn’t a learning battle, but an emotional one. What do you do when the homework is draining the life out of your house? Tell me your stories, please. Inspire me with successes and encourage me with failures. Help!

18 Responses to “When Homework Engulfs the Whole House”