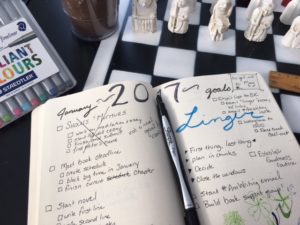 For me, one of the biggest barriers to setting goals is stopping doing things long enough to decide what I want to do.

On Episode 34 of the #AmWriting podcast, Jessica Lahey and I talked writerly goals: specifically, what makes a good goal, and how to set some in honor of this traditionally goal-setting time of the year. For Episode 35, we’re actually setting those goals—which means getting them down on paper.

It also means checking in on last year’s goals. Here is one truth about those goals: I can’t find the paper I wrote them on. (On the plus side, I found $40 while I was looking, and while I was putting the $40 in the bank where I keep found money, I found a leftover Halloween candy Twix bar. So it’s already a good day.)

Here’s another: I know some of them became outdated when Motherlode became Well Family. Sometimes goals need to evolve, which is actually a good reason to set some check in points throughout the year.

But here’s the last, best truth: I achieved two big goals, and I did everything I myself could towards a third, although I didn’t ultimately pull it off (it was a “become President” rather than a “run for President” kind of goal). I also brought my Twitter following almost to the number I had in mind (I was shooting for 20K; I’m at a little over 18K.) Putting those goal down on paper, and listing specific steps that I could do myself to move in their direction, really helped me get there.

So what could I do better about setting goals this year? Looking back, I started off right when I dubbed my goals “quarterly”—and I did that first check in at the end of March, but then I fell off. Truth is, “quarterly” doesn’t match my mental calendar.  I like Lisa Woodruff’s idea of three “New Years:” January, May and September. Three periods, like a hockey game–and just like she says, those coincide with when my year and schedule are shifting. I’ll be setting my goals with an eye towards a May check-in (which just happens to be my book deadline).

As to my actual goals, we suggested setting 4 Achievement Goals—two you can control, and two you can’t—and giving each three you-can-do-it-yourself steps to get started, along with a time horizon for each. Then I’m setting some strategies, and finally (a favorite part) declaring my one-word theme of the year, an idea I picked up from various friends including Lisa Belkin and Gretchen Rubin.

I re-created the worksheet we offered at the end of Episode 33 in my bullet journal (no losing this one!) with goals, steps, Strategies. I’ve already revised one of my goals since the podcast—after realistically looking at the next five writing months, I’m going to set aside my “Shouts and Murmurs” goal for a while. Instead, for my January-May goals, I’ll be working on:

I’ve got other goals related to my work at the Times, the #AmWriting podcast and the time I spend connecting with others, too. All of them have steps and–I’m not sure we emphasized this enough–shoot for a measurable result. “Be more productive” is not measurable. “Finish 6 essays by the end of January” is.

I like to use this opportunity to reassess my work strategies. Working on my most important piece of writing first thing in the morning—before I look at anything else—really works for me, but too often, I don’t get there. Now’s the time to re-commit to making that happen, and set some other strategies as well. I used to go to bed at nine and write for an hour before turning off the light (I called that my “do you want to have read a book, or do you want to have written one” strategy). Maybe that’s what would work for you. That was when I had a non-writing day job—now, by nine, the writing part of my brain is fried.

I’m also drawing out calendar blocks in two-week increments and filling them in with a plan for each day that takes into account the regular interruptions to the routine, tells me when I’ll run my mile and makes sure that book time is blocked off. I’m going to try scheduling in my social media time, so I know it’s coming and I can’t kid myself that I’m “working” when I spend an hour mid-morning trolling around the various sites.

Word of the year

I love this part.

Connect, my 2016 Word of the Year, kept me focused on something I really wanted to achieve both professionally and personally. I made big efforts (for me) to actually meet people I knew only online, to deepen the online connections where that was the best option, and to make new connections—which I mean in the strengthening our bond with the rest of the community sense, not in the rolodex sense. And at home, I spent more actual time with family and friends instead of with my laptop. “Connect” was a big success.

My 2017 word/theme is “Linger.” I wrote a whole blog post on that one, which you can read here.