Before You Limit Your Kids’ Screen Time, Should You Look at Your Own?

I’ve been drafting a chapter on screen time, and that meant research into the basic numbers—how much are we online, anyway? I thought I pretty much knew the score, but at least one of the latest factoids surprised me: we—parents of children 8-18—report an astonishing average of over 7.5 hours a day of personal screen media use.

Really–not emailing your boss, or working on a spreadsheet, or researching screen use numbers. Just, I don’t know, whatever it is we do. Watching TV. Reading the news. Texting. Games. More texting. Facebook. Stuff.

I didn’t even know I had 7.5 non-work or sleep or cooking/cleaning/showering hours a day, but goodness knows that’s not how I mean to spend it.

Teenagers report a little under nine hours and tweens (8-12-year-olds) about 6 hours a day (that excludes work, school or homework screen time).  Younger kids appear to watch and play less: parents report that children 5-8 spend about 2.5 hours a day on media, 2-4-year-olds 2 hours and children under two about an hour.

Those are some astonishingly big numbers for tweens, teens and adults—and in some ways, they make a mockery of the chapter on screen time I’m trying to write now, and of the parental concern about monitoring our kids online. So much of our conversation around screens is about setting limits, and yet the one conclusion that’s easiest to draw from those averages is that if the goal of limiting our children’s media usage is to teach them to set reasonable limits for themselves later, it’s failing. Our younger kids (more controlled, based on my research) don’t do so badly, but the minute we let them off the leash, usage skyrockets.

Meanwhile, it looks as if we can’t even limit ourselves—and yet, in that same survey in which parents reported a whopping seven-plus hours of personal screen use a day themselves, the majority (78 percent) also cheerfully declared themselves to be “good role models” when it came to media and technology use.

I think we can safely say that we’re serving as role models, yes. The “good” part of that, we might want to question—which made me want to question myself. How much time am I spending all over the Internets outside of what I do for work? What kind of example am I setting, and how can I both do better, and teach my children to be more aware of what they want to do online, and whether it’s what they’re actually doing?

So here’s my plan. I downloaded an iPhone app that would both tell me how much time I spent on my phone, and offer me a look at how I spent that time as well (I chose Moment, there are others). I also downloaded an app for my laptop (Time Sink) that could track which open window was on top and in use at any given time. To make the best use of the laptop app, I shifted as much work-related online activity as I could into one browser, and kept the distractions in another (Time Sink, and similar programs, track your usage of a particular piece of software, and since some of my apparent web surfing, and even some of my social media time, is work related, I wanted to be able to easily make a distinction).

I invited my two older kids to do the same (disclosure—I don’t have buy-in yet). My goal is not to track their time myself, but to invite them to consider how they’re spending it, and, I hope, start some conversations. For myself, I know that we mind what we monitor. Tracking things like time spent on a phone (or what we eat, or how many steps we take) makes us more aware of them, and pushes us in the direction of the behaviors we want. Now that my phone is rolling up a gentle reminder with every fifteen minutes of use, I think twice before I pick it up if I have no real goal in mind. Now that I can actually track how long I’m drafting my chapter on screen time, as opposed to sitting with my hands on the keyboard, reading a funny article about how Supreme Court picks should be announced, I’m spending more time at least staring at the right screen. 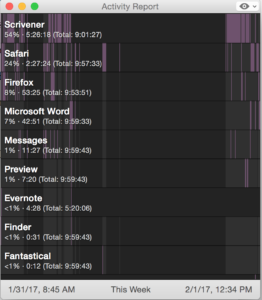 Here are my stats for the first day and a half of this week (sadly, Safari reflects mostly non-work Internet use, and Firefox actual research, although in my defense my email is still in Safari, and that wasn’t all random surfing—I had family online shopping to do).

And here are my phone stats from yesterday: 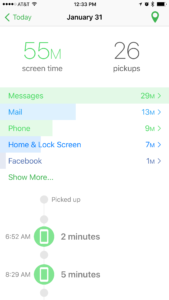 All told, I spent just under 3 hours on screens for personal reasons yesterday—probably a little more, because I’m pretty sure I logged in briefly on a desktop that’s not monitoring. Less than 7.5 hours, yes, but still more than I’d have guessed. In my mind, I’m only on my phone for a minute. Turns out (shocker) those minutes add up.

If you and your tween or teen would like to join me in what I’ve dubbed Project Free Time, I’d love to hear how it goes. Chose any tracking app that works on your phones (Moment is a free app for iPhone, although I chose the paid version, there are many others) and, if you want, your laptops (I chose Time Sink, a paid app; Rescue Time works similarly and has a good free version). Watch yourself for a while. Talk about it. Maybe take a look at how often you’re using your big screens, too (the vast, vast majority of that parent screen time usage was in television and video watching, although 7 plus hours a day remains staggering). Then, report back—email subject line Project Free Time.

I hope it sparks some conversations, some thought, and some good stuff—or if you have another way of helping yourself, and your kids, be aware of the time we’re spending on our online lives, I’d love to hear that too.