My kid has a “project” due. What’s ok to help with, and what’s not? 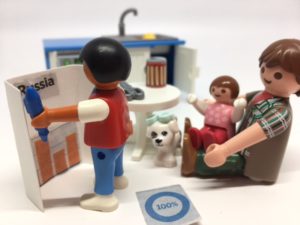 Teachers, especially in elementary school, assign projects for a reason: to help children learn to tackle something that has to be done over more than just one night, and then let them practice that skill. There, may, especially with older children, be other goals, like learning how to research, or how to structure something like a portfolio or presentation, or independent learning, but that time management goal is always present, along with similar skills like setting reasonable expectations of oneself and meeting your own deadlines, and you’ve got a lesson in useful life skills, not an oral book report.

Too often, though, parents miss that bigger picture. We focus on what looks like the academic aim, figuring that as long as our child reads the book and is in charge of the content, the rest—the poster board, the costume, the props–is just window dressing.

In the academic sense, of course, that’s true. But we tend to get the meaning of that truth backwards. We figure it doesn’t matter, then, if we “help” get those things as strong as possible. Instead, it doesn’t matter if they’re your child’s best efforts—if, in short, they look exactly like what a second grader or a tenth grader would come up with if he put his own mind to it and took the time and trouble to do his best, which is exactly what the teacher is trying to look for as she grades the life-skills and effort parts of this assignment.

Many writers before me, including Jessica Lahey, Julie Lythcott-Haims and Wendy Mogul, have gone deep into the details of why that work, and those failures and successes, should be your child’s and not yours. But what does that mean, exactly?

Your hands-off seventies mother dropped you off at the library to research Betsy Ross and didn’t even tell you that you’d spelled “seamstress” wrong on your poster, but she did sew you the cap and apron you asked her for. Your dad never edited a paper in his life, but he spend hours with you in the study, trying to get the new printer to work with the word processor, before he drove you and your floppy disc to his office at two in the morning to print your English paper during junior year. No one ever wrote entire books accusing their cohort of hovering. (Instead, they were attacked for the self-esteem movement, proving that there’s no winning the generational parenting blame game.) So what can you do?

Help make a plan. In the early grades, you might ask questions like: What do you intend to do? What will you need? When will you need to get started? For middle graders, you could invite them to tell you their plan, and remind them to check off the elements on the project requirement page to make sure they’ve completed them. At an older age, you should be open to hearing all the details—but confine your questions to anything they might need from you—a ride to their partner’s house, that set of speakers that’s in the basement somewhere, genetically modified tofu.

Pour cold water. Sometimes kids are ambitious. Ambitious is good. But a project based around providing nuclear-fusion powered cold food storage is not a realistic plan for most fourth graders.

Teach technique. At some point during my own elementary school career, my mother, a teacher herself, found me lettering a poster for something or another—anti-littering, maybe. And just as I was about to begin at the left and letter my brilliant slogan across the pasteboard, she stopped me, and showed me how to center the phrase by counting letters, punctuation and spaces, finding the middle and starting there. This was useful. This is, in fact, still useful. She could have just centered it for me. Instead, she showed me how.

Highlight road blocks. Sometimes there are real world limitations that you can’t expect a child to be aware of. A six-year-old might not remember to ask you for needed supplies before stores are closed, a third grader might not remember that her partner’s family keeps the Sabbath and she won’t be able to work Saturday, while your child has a family reunion Sunday.

Support big dreams. Pour cold water on nuclear fusion, yes. But a paper mache model of  Epcot Center’s Spaceship Earth from a third grader? He can try. He might be disappointed in his own result, but being unable to bring a vision to fruition—this time—is an experience everyone should have.

Troubleshoot. Paper mache Spaceship Earth model so heavy it crushes the straws meant to form the base? Let’s think of something else to put under there. Project partner’s mother and sister vomiting, leaving him an unwelcome guest in your home and you unwilling to take your child there? Suggest FaceTime.

Helping your child learn to do a big project (as opposed to creating a successful project) doesn’t mean leaving a second grader to do her own web search on “Penguin mating.” (This is, in fact, a very bad idea.) It means finding the line between supporting and doing, and staying firmly on the cheerleader side.