The end of the school year might be harder on your kid than you think. 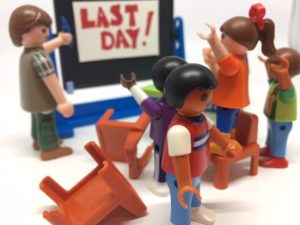 Summer starts soon, and that’s a glorious thing. Kids and adults alike look forward to summer, it’s a more relaxed time for most of us, brighter and simpler.

But nothing starts without something else ending. And as much as your children may be looking forward to summer, they may also find it hard to see the end of the school year—even if they never admit it or recognize it.

The transition into the school year is a tough one for many kids, but we often forget that the transition into summer can be difficult too. For some kids that starts early, with the sense that the year is winding down. Comfortable, settled routines are being disrupted. The disruptions may be for “fun” in the form of end-of-year picnics, parties and other rituals, but they are still disruptions. Other end-of-year ceremonies, like performances and graduations, can provoke genuine anxiety, often long before they’re really on your radar.

If one of your children is suddenly acting up and acting out, if things at your house are a little tense, or if you’re seeing regression into old habits and struggles, the coming transition and all that goes with it might be getting to someone in your family, too. Or you might see something similar at the end of a sports season, even a victorious one. The tournament may be won, the glory might be coming home, but the season is still over.

If you’re where I am, you can help yourself, your child and the rest of the family (even those who weather transitions with ease) by taking a little more time, this time of year. Slow down as you move from one thing to another. Allow time for unexpected breakdowns. Know that little things might suddenly mean a lot.

Make a decision around what you will and won’t ask of your child if she struggles. Is it your sense that she’s better off if you indulge her request to leave the last day a little early, or will she regret not giving her teacher a good-bye hug and getting a picture? Can you do those things a little earlier in the season, when it feels easy and change isn’t so imminent?

Don’t plan to rush away from things, either. It’s hard to say what your child will need, or what will feel right to her in the moment, and everything will be easy if you’re in a position to indulge some indecision. This is also a great time to try to let some behaviors go, even if they’re deliberately provocative. Transition time is prime time for battles you cannot win, against an opponent who’s spoiling for a fight and doesn’t even know why. You don’t have to welcome disrespect, or throw out all the rules, but do try to contain your own need to fight fire with fire. Life is better if only one family member is losing it at a time.

I’m not just talking about young children, either. Jessica Lahey, teacher, author of The Gift Of Failure and my #AmWriting podcast co-host, says that at the end of every year, students, especially those who are graduating, begin to push even their most beloved teachers away. Especially their most beloved teachers. They’re separating, she says. They’re getting ready to move on. Later, when they’ve become whoever they will be in their new space, they can come back and be themselves again. But in that time of transition, it’s as if they need to force themselves out.

I love summer madly. I think most of us do. But some of us have to make our peace with whatever we’re leaving behind for that new season to start, and that’s not always easy. Our job as parents isn’t even to make it easier. It’s to provide space to allow it to happen, and, with an older child, to acknowledge it (without expecting things to change). We’re helping our children to grow out of something old and towards something new, and to learn to understand themselves better as they weather the constant transitions of life.

I’ve noticed that seems to involve being a punching bag more often than I’d consider ideal. I’ve also noticed that I’m much happier if I remind myself that I know what’s going on, and that I know this too shall pass.

What’s up with me this week? I’m waiting for feedback on my book draft and contemplating more long-form work (turns out I like writing books). On the #AmWriting podcast, Jess and I interviewed award-winning humor writer Wendi Aarons, known, among other things, as one of the creators of the @PaulRyanGosling twitter feed. I wrote my 1000 words a day in various places, and gave myself a sticker every time.

It’s been another good week for reading. Here’s why: 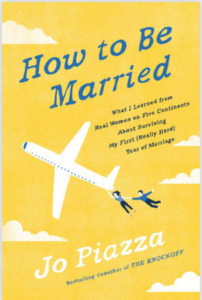 Sure, you think you know how to be married. But Jo Piazza headed out and asked pros and experienced amateurs from the saunas of Denmark to the steppes of Africa. I may have the details wrong there, but what she has is the real deal: great advice no matter how long you’ve been partnered, told in the course of an engaging memoir.

In 1939, two young women who weren’t ready to be married off themselves started a matchmaking service in London, which went on through the Blitz, the war, the peace and in fact is still at it. This is the story of the first ten years, told in the voice of the founders by someone who has clearly been listening to all of their stories for decades. It’s a different kind of read, and I loved it.

Want a weekly dose of me in your inbox, to peruse at your leisure? Sign up here, and you won’t miss a thing.

Click here to pop up this tweet:
Everybody loves summer, but the end-of-year transition is tough on some kids. @KJDellantonia on why & how to cope: http://tinyurl.com/mdvcrd9

One Response to “The end of the school year might be harder on your kid than you think.”