or pick up the kid who missed the bus. You might as well do it with grace. 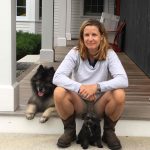 Some days (weeks, months) are frustrating. All anyone wants from you is everything—every spare minute, every ounce of patience, and oh, that sandwich you just made for your own lunch looks good too. Everywhere you look, there’s another octopus, all grabbing arms and suckers, holding you in place until they use you to push off, leaving you in a cloud of inky black.

Caught up in a day like that, I too often fight back, prying sticky hands off my legs and snapping out a “no” before anyone even gets to the end of the question. If forced, I’ll comply with your request, but it won’t be pretty, and no one is likely to end up happy. Meanwhile, I’ve almost always lost sight of the end goal. An hour of yelling and slamming cabinet doors later, and the kitchen still isn’t clean, the kids still aren’t in bed and I still feel like crap—in fact, I usually feel even worse.

When I’m at my lowest, this is my reaction to both the things I can change, and the things I can’t. I’ve yelled at a child with a dangling bracket who needs an orthodontist appointment in the middle of a busy week. I’ve refused to help a kid with a broken arm change her shirt. I’ve thrown the things I’ve asked to have put away seven times at the person who failed to do so, hard. I’ve met the upteenth request from the last child to go to bed with words that sounded suspiciously like “No you cannot have a hug! GO TO SLEEP!”

“Resistance is useless” is something bellowed by the bumbling prison guard in a bad comedy, but when it comes to my life as an adult, it’s ridiculously apt. Resistance is wasted energy. That doesn’t mean I should be a pushover. It means I should simply do the things I know I’m going to do anyway, braiding hair, making the orthodontist appointment, dropping everything to adjust an arm in a sling. I’m not owed a life where everything goes as planned, and there is no complaint department. The school nurse will always call or the dog will meet a porcupine, but there is something I can do to make the interruptions and the catastrophes feel better: I can stop griping and do what needs to be done.

As for the things that need to change—the drawn-out bedtime, the dishes left on the table, the way you just spoke to me, the fact that you asked me to braid your hair while we’re standing in the garage and I have coffee in one hand, both of our bags in the other and I’m holding the car keys between my teeth—resisting doesn’t help there, either. It destroys the calm, smashes the dishes, raises the emotional temperature even higher and spills the coffee.  Nothing is gained, and much can be lost.

Resisting is the equivalent of banging my head against the wall. No amount of yelling ever got a child to sleep faster. You’ll both sleep better with hug now, and a routine change later. Getting children to clean up after themselves doesn’t require drama, but relentless persistence and a consistent refusal to accept less. Meeting a bad attitude with your own doesn’t help, and the child who thinks you can braid hair with no hands deserves nothing more than an eye roll at that moment (what comes next depends on the circumstances).

Resistance is a great tool against dictators and injustice, but not against the people we love or the line at the post office. In our daily lives, it offers little help, and leaves behind guilt, remorse, lingering anger, justification, resentment. It pits us against the people we want most to be close to—and against our own best selves.

Today, I will try to do what needs to be done, to let things take the time they take, and not exhaust my resources in a ridiculous struggle against the life I always wanted and all the things I’d miss terribly if they were suddenly gone. Of course, that’s harder than it sounds. But I will try.