Wanna Be Happier? Go Rube. (Works for Kids, Too) 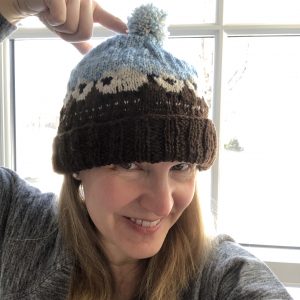 Know what I can do?

I can knit with two colors while holding one color in one hand and the other color in the other.
Trust me that that’s exciting. And that doing it feels a little like mastering a snowboard turn or finally clicking with how Sudoku works. You want to shout “I’m doing it! Look at me! I’m doing it!” (That’s a lot less nerdy if you’re on a snowboard than if you’re sitting quietly on the couch)

A few years ago, when I decided I wanted to learn to knit, using two colors like that seemed impossibly far out of reach. In particular, knitting this hat (which was super trendy at the time within the online knitting community) was something I would never be able to do.

I’m accustomed to working to improve at the things that are already “my” things. Writing, certainly. Cooking. Drawing, even. Skiing.

What I rarely do is leave the comfort zone of the at least semi-familiar. I’m not going to make a fool out of myself in any of those arenas, although I don’t necessarily shine. I can just keep doing those things and trying to do them better for basically ever, never worrying that I will ask a stupid question or take out an entire family of Canadians while trying to get off a ski lift on a snowboard. That’s at least part of the point of being a grown-up, right? You know things like which fork to use and that you don’t really have to shower before using the pool no matter what the sign says. You never have to look like a rube.*

My sheep hat and I are here to defend looking like a rube.

I see older kids aspiring to the level of cool in which you never, ever look like you don’t know what you’re doing. I have aspired to that myself, and often still do. I march confidently down unknown streets. I hang back to see how other people order a sandwich at the strange counter. I fake it until I make it or give up, and that is very sad, because I miss out on hearing directly how people do things and why, on learning to do things right, or sometimes on doing things at all.

Changing that mindset involves giving up two stories we tell ourselves: first, that there’s no point in doing something unless we can do it very, very well, maybe make some money or at least impress our friends. Second, that there are lots of things you just can’t do unless you start young–which amounts to declaring that if you don’t already know how, you’re not allowed to play.

But I want to do lots of things I didn’t learn at my mother’s knee. Knit. Grow a garden. Snowboard. Recognize animal tracks in the woods, make maple syrup, wear eyeliner, ride a horse. I don’t want to be limited by the fact that my ancestors failed to teach me how to tell a sugar maple from a red when the leaves are down.

I want to be willing to ask dumb questions, screw up, burst into tears over my inability to ride my board across scary terrain and risk the scorn of everyone from the lady at the knitting shop who cannot fathom that I do not know how to wrap and turn to the cool kid on the lift who would never, ever accidentally get in the “single” line. Because I know, deep down, that there’s something that pro knitting lady and that cool kid would like to try, but can’t—because people who judge hate risking the judgement of others.

I win! And I get an awesome hat. And, with any luck, I show my kids that there are worse things than tapping an oak tree your first time out. Like never making syrup at all.