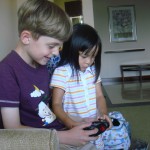 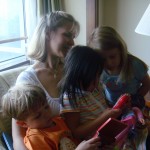 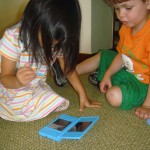 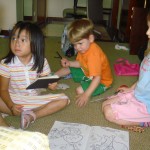 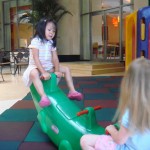 There’s a play area at the hotel: big hit. 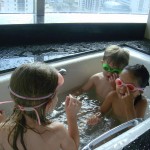 There’s a pool, but we didn’t need it today. Rory is a little fish. 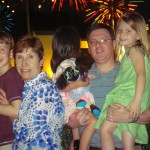 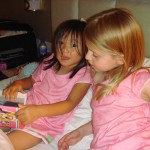 Rory shows Lily her “pic-tures” at bedtime. We saw all of her friends, and she tucked them up on the table next to her.


We are one sleepy family–what a day. Rory came to the hotel with three women she’d never met before today, and no one from her foster home. When we came in she was wailing–in English–I want to go home! I knelt down and started whispering in her ear–I knew her foster mother had told her that this was ok, that she could go with us and we would take good care of her, and she let me pick her up, still shaking. Our orig. three were quite chastened…then they needed to do a passport photo. Oh not, not in the dress she was wearing. A dark dress. Fortunately she had a dress we had sent her in her bag, and we talked her into letting us put in on over her head. Then she had to stand–no, not there, here, can’t she look us? Tilt her head, take out her hairclip,s show her ears…
She got through it. Then a family photo–no, her arms have to be showing…
Ok then. Then we were sent off for a few hours of getting to know her. For the first 20 minutes she ate candy. Her foster family knew her well–they’d put about 5 packs of gummies in her backpack and she went through four of them and two lollipops. But then she was on the floor, rifling through her and the kids’ things. She would come back for a hit of candy or a look at her picture book–that was super important. We knew we were in when she offered to share her candy.
She prefers me but accepts Rob. She calls him Daddy, and sometimes Baba. The person she did NOT want was the adoption coordinator, who I think had thought she had seen everything until she saw Rory roll through Wal-mart in a cart like a princess, confidently asking for things in English. She has us down. When she played in the tub and Lily asked for her goggles, Rory–who was going under water and popping up with no problem, laughing–took one look at the pink glasses and said “where me, Mama?” She was right–of course I had a pair for her, just the same.
She wants to do everything herself until she can’t, and then she asks. Can you help me, mama? I can’t do this. But woe to anyone who tries to help before she asks. Spitfire. Lily all over again. But after you help? Thank you, Mama.
We did have to go back up to the room where we met, to fill out some forms. I was worried–I thought she might think she was going back–so I got down and reminded her that she came with us, and she would leave with us, even if the people from this morning were there. Which they were. She looked at them carefully. And then she got up and started dancing on the coffee table.
Apparently that’s our girl.