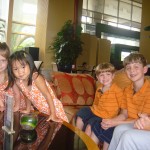 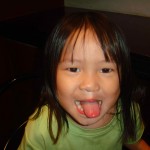 Telling her to make a funny face is the best way to get her to pose. Plus, there was ice cream.

Today was the ritual purchase of the pajamas. They like them, but the snaps are lousy…just what I need, a sewing job! 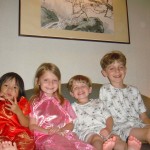 Everybody on the sofa and I’ll give you chocolate!


Shamian Island is best described as the place the British took over, back when tea and opium were in constant traffic across the sea, and although I am sure there was razing and looting involved in its creation, the result is extraordinarily pleasant. Shady verandas. Palm trees. Wide park-like walkways. Few cars. We are staying at the White Swan. It used to be right next to the consulate, so everyone stayed here. Now it’s right next to an entire cottage industry surrounding adoption, so even though the consulate has moved, everyone…stays here anyway. There are about 4000 adoptions from China every year. Figure, then, on about 40 a week. Probably more than half in this hotel. It’s a little…weird.

But good, because no one stares, and people in general speak some English, and everyone wants to help, especially if you might buy something. Instead, we got someone to take us out into the city for our shopping.

It was CRAZY. Everything you have ever considered buying, anywhere, especially Walmart, wholesale. all piled together, everywhere. Every toy, every hairclip, every bag, every clock…everywhere you looked, more stuff. On the one hand, we wanted to scoop up everything. On the other, the sheer magnitude was overwhelming. Some things I already wish I’d bought more of–hello kitty, on the other hand, I wish we’d bought rather less. We enjoyed it, though, except for Rory, who thought we were going for ice cream.