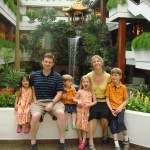 A happy family. Really, pretty much. Kinda. Getting there. 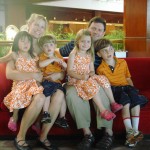 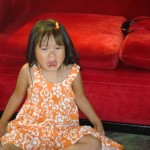 
What is wrong with that child, you ask? What are you people doing to her?

Well, it’s like this. If Rory has one single, stand-out, non-endearing trait, it is (and this is SO PETTY) that she pretty much has to go potty every single solitary second of every day. Is she nervous? Unable to complete, shall we say, with relative strangers? Does she have a UTI? Dunno. Doesn’t, in the context of getting out of China, matter. But there it is, and 80-100 times a day we experience the wonder and glory that is the Chinese public toilet. And if there is one particular activity that really, truly makes Rory have to go potty, it is eating, which is of necessity done in restaurants. (And if there is one thing that really really makes Rory have to go potty, it is the arrival of any form of hot food in a restaurant, in particular hot food that her Mama had planned on say, eating. This particular thing makes Rory have to go potty two or three times, all in a row, until the food has congealed and become particularly unpleasant. I had thought the quarantine diet particularly effective, but quarantine had nothing on Rory. But I digress, and I should stop, because there is really nothing I could say on this subject that would make you like me any better, because to be honest I really really feel quite petty and resentful about it, because I am often hungry at mealtimes. I will note that Lily did the same thing for several months, and I didn’t kill her, so there is that.)

Anyway. We had 20 minutes to eat lunch before our all-important, cannot be late consulate appointment. We had arrived at the deli. We had acquired our bizarre bread items–a pizza-like thing, and puffy bread containing things like a hot dog, or red bean paste, or hame and cheese. I had opened and strawed and fussed and napkined and generally got everyone settled and was just about to take an actual bite of my actual lunch when…

Well, Rob took her, since he’d eaten what he wanted of his weird bread-y thing while I did the whole opening and strawing and etc. thing. But they had to go back into the hotel, and we were nearly out of time, and Rory couldn’t come back to finish her lunch. And she was mad. And about to fall asleep, which she did, and slept right up until the consulate appt, where she woke up quite cheerful and pretty ready to enjoy everything–except that she had to go potty.

(Some of my resentment of this isn’t Rory’s fault. A) if she has to go, inevitably Lily or Wyatt, or both, will too–often not at the same time, but instead just after, prolonging the whole experience and B) there are some nasty, nasty bathrooms here, and the circumstances of their use frequently result in one or the other of the children peeing on my shoes.)

Ok, so all is rosy other than that, right? Pretty much not to bad mostly. I will tell you, first, of the things that are making life difficult. There’s Rory’s habit of knocking over pregnant mothers, toddlers and the elderly in her mad rush to be the one to push the elevator button–and I am not kidding or exaggerating. Picture a drunk on a steamroller plowing through the crowd and you’ll get the general idea. It’s maddening, because respectable public behavior has always been something we’ve tried to insist on–I know, I know, petty again. There’s the screaming like she’s been shot when Wyatt pokes her with a finger. (The poking isn’t really endearing poor Wyatt to me, either.) There’s the slapping of my mother’s hands and the scream of “no i can DO it” when my mom tries to open her orange drink (and no, Rory can’t do it. At least she couldn’t yesterday, or the day before, or the day before that–and I don’t mind her trying, I mind her hitting my mom.)

But really–minor. SO minor. It doesn’t always feel minor, and I assure you that the level of frustration the bathroom thing is causing for me is really not pretty, but so minor. She figured out how to swim today, to Rob, from the steps. She and Wy played happily in the tub for an hour, very much together. She loves Sam and draws him pictures again and again. She has this bright-eyed way of saying look what I did–want to see me do it? Do you want to? Which is so hopeful and so reminds me of the family she’s lost. It’s clear that there was always someone who wanted to see her “do it”–whether it was drawing a circle or swimming. She proudly described her whole day to my dad on skype. She tried to put herself to bed, because if Sam was going to sleep, she was too, but not without Lily!

This is harder and easier and wholly just a new thing. Tomorrow: a 14 hour plane ride. Hey, at least there’s a potty.

7 Responses to “The Red Couch”