The Power of a (semi) Good night’s Sleep 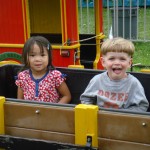 Right after this, Wy lost the right to ride any more rides by poking Rory in the face again and again on this ride. He was warned… 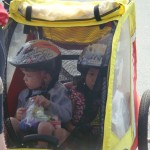 The start of a day of a little too much togetherness. 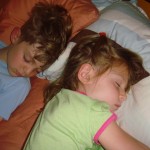 The sleep of the exhausted. 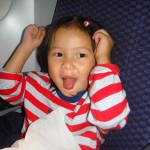 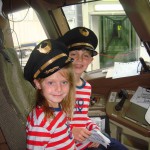 The reward for having a really good quarantine story to tell the bored crew while they wait around for the plane to be released.

Was Friday a low? I don’t know. We’ll have to get a lot further along in life to see where the lows are…But Friday was not a good day. Today, on the other hand, was and is. Everyone got a mostly good night’s sleep, although not necessarily in their own beds. We rode the 20 mile route in the Prouty (the shortest, and not what we’d planned to do, but we haven’t been on our bikes in a month!) Rory and Wyatt rode in the trailer, and I’d estimate they only whacked at each other for 3 miles or so (Rob was pulling them, so he might feel differently).

Point is, today was a little easier. Here are some things Rory is really good about: she accepts the inevitable–as in, I don’t want to get back in the bike trailer. Sorry, you have to! Okay. And she accepts it when she needs to wait to get my help because I’m already doing something with another kid. She says “okay, mommy.” She says thank you for everything. If she needs to, she shares, although she would rather not.

On the other hand, she still pokes and pokes at Wyatt until he responds, and then cries. But most of today was just him trying to make her cry…he is not happy. I know he’s not happy, I feel terrible that he’s not happy. He doesn’t want this. He feels like she’s here, taking everything away from him. He’s ok as long as it’s something he’s kind of over–but for her to ride his bike, or take me away when he wants me…
So things are going better, for me and for Rory, but not for Wyatt. And I couldn’t possibly feel worse about that. We’ll wait it out, it will be ok…I guess. Man, I meant this to be a positive post, but I’m really feeling badly about him!

On the plus side, Weeds restarted. Off to think about something completely different for a while! And here’s another plus–Rory really took to one of our babysitters today. I think she could see how much the three love her. Plus we’d stopped by her house, and she has cats, and Rory loves cats. Anyway, I go back to work, a little, on Monday and Heather comes. I’ll just be in my office, here, so Rory won’t feel left, but it’s good to imagine a little light at the end of the tunnel. I need a break from EVERYONE!

I think Sam feels the same, so he’s having a sleepover. It’s restful just to think of him getting away from all of us. (I would if I could!)