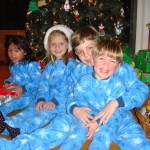 I do think we managed to savor Christmas. That Lego train? Put together in full by Sam and Grandpa, with occasional help from other kids. We played dominos (Mexican Train! from Lily to Sam!), did puzzles and baked cookies. Carols were sung, hummed and whistled all across the house, although not by me, because I have a cough and cold I can’t shake. Candy canes were eaten, stockings emptied, and even, in a few cases, thank-you notes written.

And now it’s pretty much done. We have a week, a lovely week between now and school’s resuming, that I hope we’ll take advantage of. We will make plans–it’s a mistake not to make plans, unless your idea of a good week is one spent watching Scooby Doo–get out of the house, do some skiing and skating and more baking and enjoying. Â I feel like I need a list of things I want to do so that we don’t wake up, realize it’s Sunday and we’ve done nothing. I want to make cashew brittle and chocolate cereal mix. Play more chess with Sam and teach him Risk. Nordic ski. Downhill ski. Put away the Christmas decorations and clean my bedroom. Sled. Maybe a snowman, if the snow cooperates. Finish the New Year’s cards and the calendars for next year. Make plane reservations to visit Texas in February. Do the new puzzle I bought for us all. Eat fondue on New Year’s Eve. Enjoy the week.

I’ll no doubt resume my usual schedule of angsting and fussing in January. Rory’s language skills are really lagging, and her situation is so unusual that I don’t know what to expect, or who to ask. Sam still does not love to read anything but Tin Tin. Lily invents a new ailment whenever she doesn’t want to do something, and changes what she will and won’t eat daily, and Wyatt–well, Wyatt’s such a charmer that I overlook his faults. I’d say he still needs more of his own time and things. And I still need that agent, and I have a new column to get started on, and a whole new year’s worth of pulling work together ahead. A book to write and sell, and jobs to do my best at, and oh, that question of feminism that came up a few posts ago to address. Politics to keep up on and comment on, a house to organize, a self to better (I’m planning on a pack of resolutions involving being just a more considerate person overall, but I can’t even address that until I mail all of my New Year’s cards and the kids’ thank you notes!) I have a couple of target magazines to crack and just lots to do–but first, the rest of Christmas. We may have taken the tree down (thanks Mom!) but it ain’t over until the fat lady sings auld lang syne.