That Gon’ Make Me ANNOYING! 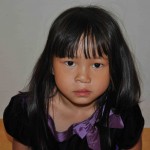 It actually IS annoying when you won't smile for a picture.

Well, yes, yes it is. In fact (and this is awful, and I know it), you were already annoying. Far more annoying than your brothers and sisters. and I’m trying to figure out why.

Rory doesn’t mean she’s annoying, of course. She means she’s annoyed (by Lily’s singing in the car, and in this case, she’s absolutely right). But ti’s something she says often, and oh, it rings so true for me. Why is Rory (4, and home for very almost close to a year now) so much more annoying to me than the other three kids?

I actually have a couple of ideas about why–but first, just for my own venting purposes, do let me catalogue the ways in which I get annoyed. (Note my phrasing? I GET that it’s not that Rory is annoying–not really. She doesn’t annoy others. It’s that I am annoyed by Rory’s behavior, which is a whole different question. And I mostly, nearly almost always at least kinda really try hard not to take that out on her. And I often succeed.) Herewith, a short list:

I could go on with this list, but I won’t. For one thing, I get annoyed just thinking about some of it. For another, well, it really just goes on and on and on. And it makes it sound like I don’t even like her, let alone love her, and I do. Lots. And my other kids have lists too. They’re just shorter.

What I think is that every stage has its annoying moments, and Rory is going through a whole passel of stages at once. Every one of my kids, at about two and a half, had to turn every bathroom visit into an odyssey. Every one talked and talked and talked when they first got to a point when they could really communicate. And they’re all, still, prone to hanging on to the things I do for them that I do for only them, and “wiping” certainly qualifies. So there’s that.

And then there’s leftover stuff, huge foster family stuff, like the screely noise (which MUST have garnered her plenty of attention). And the dog thing. No one, ever, does what Rory wants to do just because Rory wants to do it. They might agree to play, or work out a deal, or choose something together–but there is no one that she can just tell to do something, who does it. The dog qualifies. She’s manipulative, too–I didn’t mention that. If everyone is cleaning, she’ll poke at one item until everyone else has done all the work. She asks for candy after crying–as in, she had a big boo boo or whatever, and there was a big fuss, and it’s over and…now can I have the candy you said no to half an hour ago? I chalk that up to foster homes and foster nurses, too. If I were a nanny in a foster home, I’d stuff the kids with cheap candy constantly. Why not?

And then there’s stuff that’s just Rory. She has to pee, she really does. And she has a voice that’s best described as piercing, which means she gets “shhh’d” when no one else does, just because her tones carry. Eventually she’ll deal on her own.

So, there it is, my annoying rant about my sometimes annoying kid. I could have posted all the ways in which she is extremely cute–like when she lays on the same dog, thumb in her mouth. Or her new words, which include “awesome” and “cool.” Or her delighted affection for her ice cream shaped silly band. There’s an even longer list of all of that.
But right now, I’m on the question of annoyance, and it’s time to look at how the blame should fall on me.

Rory annoys me because I try to do too much at once–typing on the computer, for example, at a time when I know they’re needy. She annoys me in the car because I get tired, and I just don’t want to talk–but if I changed my attitude, it wouldn’t be a big deal. She annoys me when she asks for food right after a picnic because I don’t make her sit down and eat–and I should know by now that she won’t eat if there’s anything better to do, a quality that will stand her will in life. She annoys me because I often don’t want to focus on the kids, and nobody’s more gifted at making a person focus on her than she is. All those things aren’t even a little bit about Rory. They’re about me.

Knowing that doesn’t change much (although I have designated big chunks of time as kid time now, instead of trying to multitask constantly, and it’s much better). But it tempers my reaction. It’s pretty easy for me not to react, knowing that I’m only reacting to my own responses. I save the reactions to respond to their actions, now. When I yell because I’m annoyed, I really just ought to go in the bathroom and yell at myself.

Cross-posted at No Hands But Ours.

8 Responses to “That Gon’ Make Me ANNOYING!”