7 Things To Do Before Summer Slips Away 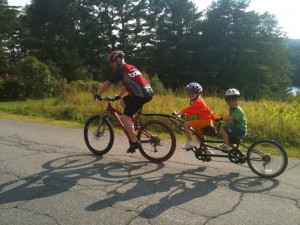 Rob, Lily and Wyatt (Rory was on my tag-a-long).

It’s August. Do you know where your summer’s gone? I don’t. Some of it’s gone to the pool, for the kind of lazy afternoons spent on towels eating popsicles that I remember as a kid. Some of it’s been whiled away by my nine-year-old’s determined statement that it was The. Most. Boring. Day. Ever, which, if you ask me, isn’t really a bad thing. It’s in the garden, sure, it’s in our newly cleaned out garage. But what I want to make sure to remember is to get some of it into the memory books.

At the end of every summer, I’m left wondering what happened to the big plans we had in June. The vacations happened, sure, but the days in between seem to have slipped away, and what felt like an endless amount of time for day trips and tee pee building becomes a rush to buy lunch boxes and backpacks. We’re not there yet, though, and I’m determined to make at least a few of the big, what-I-did-this-summer plans happen before summer is gone.