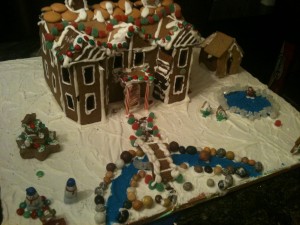 And yes, we made a gingerbread house. Still are, really. Sam and I have planned a Kit Kat fence to finish it off. So it sits, covered in candy, on the dining room table, next to a box full of candy.

This has been hard for Rory. Decorating it was not so bad. There is only so much candy any one child can eat, even Rory, especially if it’s kind of all the same candy. She ate some. They all ate some. I don’t worry much about sugar or candy or the like, so as long as she wasn’t just sitting there shoveling it into her mouth, I didn’t worry about it. And she was very conscious of the whole thing. She’s gathered that I’m not big on her candy fixation, and I could see that she didn’t want to blow it–I told her to eat “some, but not all” and not to “just sit there and eat candy.” She didn’t.

After we decorated it, she’d come home every night and sit in front of the house. “When we gon’ eat that candy?” She’d ask. After a day or two she started answering it herself. “After Christmas. We gon’ eat that after Christmas.” Often, she’d refer back to the day she and I bought the candyâ€”just the two of us, and I said Oh, Rory, this is SO MUCH candy! How will we ever eat so much candy?” Now she says, “‘Member, Mommy? ‘Member? You said ‘how we gon’ eat so much CANDY?'” This is funny.

At the same time, we have advent calendars. Lego ones (and Playmobil for Lily). One lego a day, and that’s it. This, too, is very hard. At first Rory wanted to open all the doors. We’ve had a different advent calendar before, but it required that I fill it, so generally, even if you peeked ahead, there was nothing there. This is different, of course, you could sit down, open the box and just blow the whole thing up. On the first night or two, I thought Rory might.

But she got used to that, too. No one else wanted to open all of their doors. Last year, she might not have cared, but now she does, very much. So every day, one lego, and no gingerbread nibbles. I think that December is a remarkably good month for Rory. It never occurred to me before the onset of the advent calendar and the gingerbread house, but the whole month is a study in the famous Stanford marshmallow experiment, the one where the four year old goes into a room, and there’s a marshmallow on the table, and she or he is told that if she wants, she can eat it–but if she can just wait, wait until the adult gets back into the room, then she can have two.

This was 40 years ago, and, broadly speaking with some exceptions and clarifications you can read about in the New Yorker article I linked above, kids who could wait have been more successful adults. And here we are, with a whole month of waiting for the marshmallow, and on top of all that, there’s no second marshmallow in the offingâ€”only the reward, as it were, of the waiting itself. Of my approval, and her siblings’ approval. And of the pleasure in the waiting, in anticipating, in enjoying the possibilities in the offing.

I’ve always loved Christmas. (Which is why we make such a crazed gingerbread house. I love doing it.) Now I love it even more.