How Old Are You Now?

When we set out to adopt, we initially thought of a baby. Not an infant–our thought was that there were many, many parents out there who wanted, even needed a baby. A baby, we figured, didn’t need us. Plus, we’d had babies: three of them. We didn’t need the neediness, the sleepless nights, the crying, the helplessness. Didn’t want it. Anyone who’s already been through this is already laughing

We thought we would adopt an older baby , a toddler or a preschooler, who could fit right in with what were, at the time, our 2, 4 and 7-year olds. They were 3, 5 and 8 when we adopted Rory, who was 3, nearly four. In calendar years, at least. 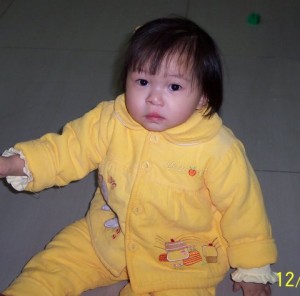 When we first got Rory’s’ referral, Â I struggled with her age. She was a little older–6 months–than our youngest, my baby. He was a little unhappy about that. And almost four seemed old. I knew she would remember her life in China. She would have more reason to hate of fear us. She might have gone longer without love, or medical help, or anything else she needed. I worried about it. A lot. I studied the pictures and records we’d been given. The pictures we were sent were of a much younger child. Was it possible there had been a mistake?

Nope. We were soon in contract with Rory’s foster family (through one of those flukey things that are more common in adoption than I ever imagined) and were certain of her age. More than that, we had more recent pictures, of a confident preschooler marching happily through life, on a playground, at Easter, even at McDonald’s.

So I talked myself, as one does, into this–adopting a three-and-three-quarters year old–being the best possible thing for all of us. I was ready.

Which means it was a terrible shock to me when we adopted a baby.

Oh, not really. We adopted Rory, all right. But there’s this thing called “family age,” which I’d read about but not put much credence in, a theory that kids will regress in so many ways that it’s almost good to think of them as being only the age they are in your family. One month old, two months, one year: Rory would be 19 months old now in that light.

I discounted this because I was thinking of it as all encompassing. I wrote it off as applying to kids from institutional settings, and deprived ones at that. Rory, I knew, knew how to live in a family. She had been a beloved family member (of a constantly changing family,something I failed to spot at the time) since she was two months old. She might regress a little, but it wasn’t something I thought much about.

So many of my adoption stories include the phrase “boy, was I wrong.” This is one of them.

Rory wasn’t really a baby. She knew how to talk, walk, use the potty (we did have to introduce the toilet paper concept), feed herself. She knew how to act with other kids, and she knew, because her foster family had told her so, that we were Mommy and Daddy now. But oh, did she need to be babied. She’d been through hell. Her foster parents left her a week before. Foster nannies, other caregivers had put her in one van and told her to wave good-bye to foster sisters and brothers she’d known all of her life. Kids she’d shared a crib with. People she loved and counted on. And then they put her in a van, and handed her over to strangers in another van who brought her to us. By all accounts she kicked and bit the whole way. (I’m perversely proud of that.)

And now she was with us. She knew who we were. We had skyped and sent a video. She’d been told to come love us, and we would take care of her. And here we were. Never, ever has a kid been more in need of the kind of all-consuming love and attention you would lavish on a new-born. 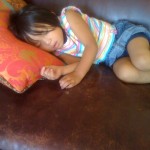 She didn’t get it. I’d sold myself on a preschooler, and I wanted a preschooler. Our trip thus far had been no picnic. We’d been detained, then split up and quarantined. I’d spent a week in an un-air-conditioned hotel on the outskirts of Beijing in a heatwave, husband locked in a hospital, mother and kids with me and no idea what I’d do if the authorities tried to remove my mother or one of the kids. When I excuse how little I had left fornRory at that moment, I tell myself I had post quarantine distress syndrome. I should have stepped up. I know I didn’t.

When Rory needed babying, too often I stepped back, expecting, demanding that she be the big girl in the picture. I didn’t want a baby. When I gave up on the younger kid idea, I Â focused on all the pluses: that she wouldn’t have to be carried. That she wouldn’t have needs that effectively put all of the attention on her. That she would’t crawl, or scream inconsolably. I saw it as a trade off, and of course it wasn’t a trade off at all. I didn’t “sign on” to parent some ideal of a preschooler. I signed on to parent Rory, whoever she was. No one, Rory least of all, had made me some commitment that she would behave in some particular way. I’d made it to myself, more fool me, and it locked me into ridiculous expectations and even worse behavior. When a better person would have knelt down, snuggled up, lifted, carried, I stood tall, stiff, removed and Rory walked.

It took months for me to open up to the baby needs Rory still carried in her heart. She had been a baby, but she had never been my baby. She needed me to show her how I could love and care for the baby in her. She needed me to give that baby the sense of me rocking, tickling, singing. But somehow I fought that. I thought she was asking for spoiling. I thought she was trying to manipulate me away from the other kids. I thought if I gave her an inch, she’d take a mile. I thought it was wrong to treat the big girl I’d adopted like the baby I’d first imagined, that she’d think I didn’t expect her to act like the other kids. And I just couldn’t bring myself to do it. As stiff as her body was when I did take her into my arms, as much as she refused to melt into my lap–I didn’t melt, either. We were at cross purposes. She needed a parent I wasn’t being, and I wanted to parent a kid she wasn’t anymore.

If I had believed, if I had gone into this, or been able to go into this, expecting to put my heart and soul into a baby in the body of a three year old girl, our transition might have gone easier. (if I hadn’t been burdened with the week of fears of what I, in planning this adoption, had unwittingly risked for my mother and three other young children, that would have helped, too–but while that offers a small explanation, I don’t think it excuses my failure to step up). It’s only now that I see that everyone of us parents adopts not just the three, four, eight, twelve-year-old in front of us, but every child she or he has been up to that moment. And we need to parent all of those kids, sometimes all at once. Maybe that’s why sometimes it feels so hard. 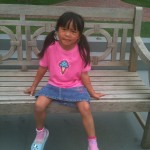 Not tonight, though. Tonight I held my baby Rory tight and sang her a lullaby while she rocked and sucked her thumb. I tickled toddler Rory’s back I rhythm with another tune, and I read a big 5-year-old girl a chapter of a new book along with her sister and ine if her brothers, and I shared a dream with that girl about an even bigger, older Rory, six, seven, fourteen, forty-two–still snuggled safely in my arms.

Cross-posted to the No Hands But Ours blog.