A Cleaner Car = a Better Life

Let me just say: actual adults could now ride in every single seat of my car. Rob’s boss’s wife. Your mother. Martha Stewart. (I would let any of them ride in the passenger seat. Of course. But say they were ALL in the car.)

Now they could ride. I would not have to say “Oh, my God, I am SO SORRY.” Or “I have a towel. Do you want a towel? Seriously, take the towel.” Or “Shit, I don’t know what that is, but I’m pretty sure it won’t stain.” And here is how this miracle took place:

My car is CLEAN. Clean, clean, clean. I only took one before and after picture, and it’s kind of lame: 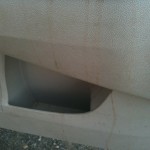 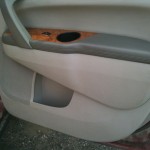 I mean, you can see that it’s better, but it’s just not dramatic. So how about this. I don’t want to get personal, so picture, say, your neighbor’s car. You know the one. The SUV you’d never, ever ride in, with the knee-deep goldfish and the stains on the ceiling (how do they do that?). The one that your kid came out of with a lollipop stick, a post-it and a fruit roll-up stuck to his butt last year. That car.

Now, picture a new SUV. Well, not a new car. A new used car, say, about three years old. Get that, and then put some popcorn down in the the gaps the rear seats roll in–you know, the ones no vacuum known to man can reachâ€” and a couple of jelly beans. And then get a crayon and color some above the rear passenger 2nd row seat, and get a pen, and make a few marks on the rear driver’s side door, and then rub those off as hard as you can. Oh, and take off one of the radio knobs in the back. And spray it with some Method grapefruit all-purpose cleaner, and rub liberally with a cloth scented with orange cleaner and: Voila! My car!

It is VERY NICE. And it took, um, 4 hours–but you have to add in driving to the car wash and back, and dropping Lily at a playdate, and going through the McDonald’s drive-thru, plus a small wait at said car wash. 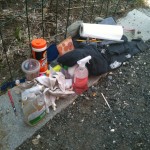 Can you tell I’m feeling proud? But I’m also feeling dumbstruck. Because while this is the first time I’ve really climbed in and wiped and scrubbed and wiped some more since probably last summer, I have vacuumed it recently, and thoroughly. And there is, in theory, a rule–that you can’t eat in my car.

And it’s pretty clear we’ve been eating in the car. And we have–not just the road trip lunches, either. All of a sudden, every day, it’s been afternoon snack in the car. In fact, what, two blog posts ago, there I am, wailing about disastrous parenting resulting from snacking in the car. Our life should not be busy enough to require that we eat that often in the car. Small children can, I’m told, go for several hours without refueling. And they don’t need that much food to begin with. And, seriously, they should not need to be bribed with food to go get their older siblings at school.

I’m incentivized. I wish to turn over a new (old) leaf. I do not want them to eat in this, my glorious clean car. And if (when) they do, I want them to clean up. I’m pretty obsessive about that–and yet, I found multiple lollipop sticks under Rory and Wyatt’s seats. So:

Our afternoons are too busy. There is one afternoon when Lily and Sam will really need to eat a snack in the car after school, and a second where only Lily will–but that does not mean that others, who can eat their snack at other times, before or after the car ride, will eat too.

I’ll admit it, though, it’s such good multi-tasking: ride in car for 20 minutes, eat snack. And we don’t go anywhere that’s not at least 20 minutes. But the results are so unbearable! I have serious incentive, this time. That car cleaning was good for the soul but bad for the nails, and I don’t want to do it again. Has anyone (besides my dad) ever succeeded in a no-eating-in-the car regime?

One Response to “A Cleaner Car = a Better Life”