How It Could Be

by KJ in Have I mentioned that I have kids?, Raising Devils 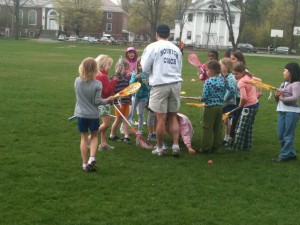 Lacrosse for COMPLETE beginners. Even I could perhaps learn.

Lily’s lacrosse takes place from 3:15-4:15 at the green in front of the elementary school in one of the next towns over. On the down side, it’s a solid 20 minutes there from Lily’s school, which gets out at … 3. This means we WILL be late. No matter how hard I try. I can be bright and shiny and first in the carpool line, and there we will still be: late.

On the plus side, Lily’s lacrosse is IT. And it’s done at 4:15. Even with some dallying on the playground, we’re home by 5 or 5:15. I had baked potatoes in the oven. Sam and Lily were both suddenly motivated to zip through their homework by an inexplicable desire on the part of everyone to watch “Pooh’s Heffalump Halloween” for a random “movie night.” It’s an hour long, so even with that there was ample time for lunch making and playing and generally getting wiped from all the lacrosse that took place during the afternoon: 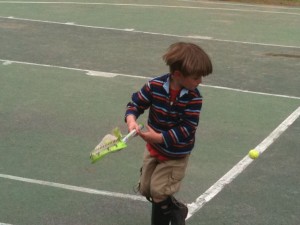 He's got the hair for this, doesn't he? 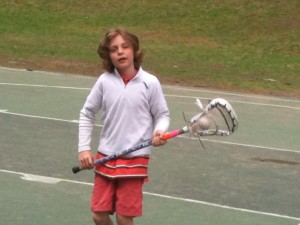 And so does he.

It was such a mellow night. This is how life could be, will be, once things tone down a bit and I let them, as I swear I will. Once soccer (two more weeks!) is over and Mondays and Wednesdays are nothin’ but chillin’. One of my friends, reviewing the same situation, said “that will free up some options!” and I was like, no, no it won’t. That will free up some time, and that time is going to stay free.

I’d say never again but I wouldn’t mean itâ€”the two sports each (three for Lily, but only because she’s going to be there anyway, only one day is just for her) we’re doing are fun and low-key and pleasant for all, and this month, May, is the only time this needs to be this way, and only for a few more years. Soon enough they’re not going to be this into this many things. We can do it. But oh, today was nice for everyone, and I think everyone felt it. I’ve kept camps to a bare minimum (2 weeks day camp for Sam, one for everyone else, half-day for littles), and stuck firmly to it. We will not pick up one single thing more. We will come home and twiddle our thumbs and work on Krypto’s new ability to drop the ball when told to “drop it” even if the teller is Wyatt (as long as Wyatt doesn’t chase him).

Speaking of Krypto, it’s clear he’s got a real silver lining in being the only dog. He goes to soccer and lacrosse. People take him for walks and play fetch with him. I’ve finally started semi-training him. He’s so happy he doesn’t even know what to do with himself, and while I miss Caddie, that’s a really good thing.