by KJ in In my garden, Life in a Northern Town, Raising Devils

I love to grow food.

I’m pretty indifferent about flowers. I mean, flowers are nice. I like it when there ARE flowers. But there’s a limit to how much time and effort I will invest in flowers, and I generally reach it about the moment when I get to the farm stand, note the huge selection and decide to go get a coffee. (Good thing the farm stand has coffee!)

But growing food–whole meals so local we are talking steps to the backyard? An entire summer of nearly no substantial grocery shopping beyond milk and, well, chips? Just the fun of saying “we grew this whole salad?” I’m into that. Sam, Lily, Wyatt, Rory–they’re into it too, at least kind of. They’re into the fun part. The work part? Not so much. And much as I enjoy the Little House on the Prairie family work ideal (Laura! Mary! Plant those peas or we will all starve this winter!) I don’t think any child who’s actually been to the grocery store is going to buy into the urgency. So it becomes more of a question of how much is gardening a chore, and how much is it a pleasure, and how much do I force it on the kids?

This weekend, this was the chore in question: 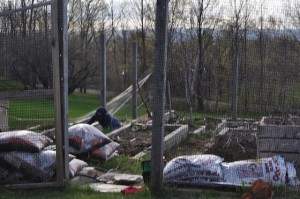 That's me, hunched down on the side.

Note that on the paths, we are growing a substantial quantity of grass. That’s not so bad now, but in a month, it will be an thicket of grass and weeds, unpleasant to walk through and blowing its seeds right up into the bed. I’ve tried a series of mellower weed-staunching ideas out on these paths. There was the newspaper the paths over the winter, mulch them in the spring idea. The let’s-just-weedwhacker-the-grass idea. The straw-down-over-last-year’s mulch idea. None worked, although the small chunk where I used cardboard boxes that wintered down into the ground and then mulched over those came close. Mostly, though, I had this really nice raised-bed garden with awful weedy paths. And it bugs me. 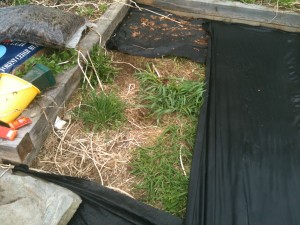 I think you could make an argument for weeding the paths before you put down the weedpaper, but I didn't.

So I decided I’d lay down weedpaper, staple it to the beds and then put mulch down over THAT. This took some time. 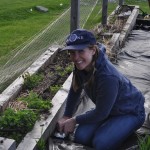 Look, in this bed we're already growing a hefty crop of ... weeds. 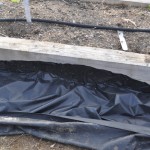 I did enlist Sam for some help. He stapled one row. With, as you can see, great enthusiasm. It is a good thing I ran out of weedpaper at the same time I ran out of staples and had to get more of both.

But then Sam got sick of it. The weeds in the path meant little to him, and the satisfaction of a job well done was apparently just as elusive. The plants will grow just the same whether there are weeds in the path or not. It was a long, tedious chore. I made him finish the row he’d started, and then I let him go, and when I picked the work up again later, I didn’t bring him out, except to take pictures for me (I now have 50 identical, slightly blurry pictures of me crouched down stapling paths. You got to see the only one that isn’t of my butt.)

Wyatt spread some mulch, as did Lily. Wyatt and Rory also both put in some weeding and cleared, between them, most of a bed (spring is a GREAT time to have kids weed–because it’s all weeds! Go to it!). Actually, now that I think of it, they really did help, but not much, and not past the point where they lost interest, and not until it was done, which is the moment that you earn. But I was unconvinced that they’d really feel it if they didn’t care that much in the first place. 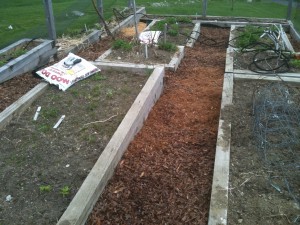 Just looking at it makes me feel soothed and calm, which is just the way I want to feel in the garden. I will not feel that way if the dandelions spring up through it allâ€”but I keep telling myself none of them had gone to seed, so they should just die. (DIE! DIE! DIE, WEEDS, DIE!) I need a few more bags of mulch (and it would probably be even more calming if i had bought all the same KIND of mulch, but they were low on the cheap stuff and I didn’t want to wait), but the stapling and papering is done. A little weeding, and we are ready to plant. That, the kids want in on.

So I don’t think we built much character today. I did keep thinking, you know, should I be making Sam and Lily, at least, slog through this? But I’m telling myself there will be plenty of time to sweat in the garden later (and there will).

One Response to “In the Garden”