When we adopted Rory, almost two years ago now, she was 3 1/2, 6 months older than our youngest, Wyatt. All of our other kids were biological kids (Sam was 7 and Lily 5), and Rory was our first (and only) foray into adoption. We “adopted out of birth order,” and as I remember it, the decision process went something like this: our social worker, Kathleen, a big, comfortable woman with shorn white hair and a confident, rolling walk, had begun to do what we were paying her to do, which was to pry enthusiastically into our personal lives and backgrounds to ensure that we were fit parents. She asked how old a child we planned to adopt. Wyatt was two then, so adopting a younger girl, as you no doubt know, was likely to be a slow process. We’d rejected it, pretty much for that reason, before we talked to any adoption professional. Although our adoption agency, always happy to be able to place even a slightly older child, sure didn’t discourage us.

My husband was just a little hostile about Kathleen’s intrusion, and by â€œlittleâ€ you can infer that he resented the entire process of having a strangerâ€”a less educated stranger, and someone whoâ€™d chosen a mighty fuzzy and not at all lucrative profession at thatâ€”come in and ask him questions about his childhood and judge his parenting skills. He was more than willing to contradict anything Kathleen thought she might know what he did not, and so he explained our position on adopting â€œout of birth orderâ€ very clearly. Lily, then three, would clearly care if her position as a â€œbig kidâ€ was usurped, but Wyatt was the baby. If we adopted someone in between Lily and Wyatt in age, he would still be the baby. Thus, birth order preserved. 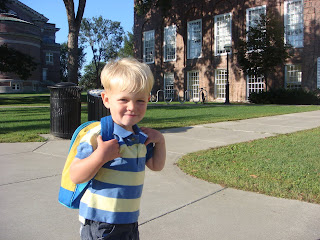 Kathleen (a lovely woman who should consider a career in poker, so impassive was her face at this moment) surveyed Wyatt, who was beautiful and blond and capable of saying â€œLily put bow my hair,â€ but not yet â€œI no want â€˜nother sister.â€ He sat on my lap. He looked at Kathleen, and she looked back at him. Wyatt chose this moment to slide a hand up under my shirt to grasp at my belly button, his favorite source of comfort. He jabbed a thumb in and began to knead, and I pulled my shirt down over his arm and smiled nervously. I was not yet as confident as Rob that he who signed the checks called the shots, and I thought she might press. But Kathleen just nodded and wrote something down on her pad before asking her next question.

And that was it. Had there been much debate before that? Nope. Much after? Not really. Our social worker is a pro, so I suspect she tried subtly to at least give us a heads up that there was more to this than we thought. But she didn’t break through.

The fabulous Dawn Davenport, who, in a different world where I am doing my whole adoption over again (but, of course, getting the same fantastic kid), has posted a set of rules on her website, Creating a Family, for Success in Adopting Out of Birth Order. They can be summed up as “Please, people, think about what you’re doing and how you’re going to do it” and that’s exactly what I wish we’d done.

to that ornery image above and get this: 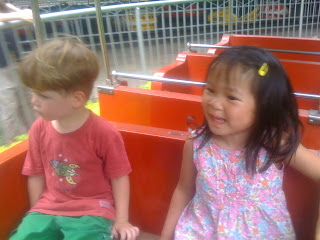 We had to adopt out of birth order. Call it fate, call it God, call it the universe ebbing and flowing behind the scenes, but our clueless assumption that we could handle anything led us to exactly where we want to be.

It was hard. To begin with, that “baby?” By the time we were heading to China, he was no baby any longer, and he’d seen enough friends get new members of their families to know that what you get is a LITTLE sister. He knew he wasn’t getting a babyâ€”they’d seen picturesâ€”and that was fine with him. He didn’t need a baby. But a “little” sister was just what he had in mind, and all of our assurances that he would be physically bigger didn’t help one bit. For months after Rory came home, he still got angry every time fate conspired to point out her advanced age, and he wanted us to fix it (so badly that I had mad thoughts of messing around with her birth certificate). But there was nothing to be done. Rory is six months older than he is, so for half the year, they’re twins, and for half the year, she’s older, and he’s relegated to “almost” whatever age comes next. He cared, indeed. It’s rare for the “baby” of the family to see the benefits of being the “baby.”

But harder still was the fact that having a child who was six months younger than Rory meant that I expected her to act her age, or at least his age. Every regressive behavior she seized on stood out in harsh contrast to the kid standing right next to her, not sucking his thumb, not having a tantrum, not begging to be carried, not asking to be fed or seeking out sippy cups and baby bottles. I knew, on some level, that those were natural things for a little girl in the middle of a harsh and sudden transition to turn to. I knew that she needed to be babied. But Wyatt made it hard for me to give her what she needed. I didn’t want him to roll back to babyhood, but if either of them was going toâ€”he was the baby! What’s more, he was my baby. Rory was my almost-four-year-old. She’d never been my baby. I’m more than ashamed to admit how hard it was to let her take on that role, and if she’d really been the baby (always remembering that I would not change a thing about our adoption, because our family is perfect and she is perfect for our family) I think it would have been easier.

If Rory had really been the baby, I think it would have come more naturally for me to let her drop into that role. Now, almost two years later, I’ve changed my thinking. She’s the baby in family years, and in family years, and family things, I let her remind me of a toddler, because in some ways she is a toddler. She gets to be more clingy when there are guests and more needy when other things seize my attention. She doesn’t get the privileges of being the “youngest” when, say, a game’s instructions call for the youngest to go first, but otherwise, she does the baby thing she she needs to, and I don’t push her to act Wyatt’s age, or, for that matter, her age.

But I know, in my heart, that we blew off birth order not because, as Dawn suggests, we really thought through what was right for our family, or who Wyatt was and what he could handle. What we thought about was little more than how long it was going to take to adopt. We didn’t want to limit ourselves, in the eyes of China, to that small range of “ayap” girls who we knew were tops on many parents’ list in the waiting child program. Partly that was selfishâ€”as I said, we didn’t want to wait. To the extent we did think about what was best for our family, we thought a child who fit right into the pack, rather than being three or four years younger, would fit right in. And less selfishly, we saw first-time parents, parents who a few years ago would have adopted babies, in line for those “ayap” girls, and wanted to be there for a child who maybe wasn’t at the top of everyone’s list. We did have our reasons for ignoring the birth order trope. But they weren’t great ones. Worse, because I didn’t think it mattered, I didn’t give any thought to how birth order might affect us when Rory came home. If I had, I’d have eased her transition (and, less importantly, mine) in a big way.

So: just because I’d adopt out of birth order again in a heartbeat (because I’d cut off my own arm in heartbeat to make sure Rory was the child who joined our family) doesn’t necessarily mean I think anyone else should do it. Anyone else in our situationâ€”young parents with young childrenâ€”I’d encourage to think harder, think twice, and at the very least to be ready. Because even if you DO adopt out of birth order, that’s still your newest baby who’s coming home. 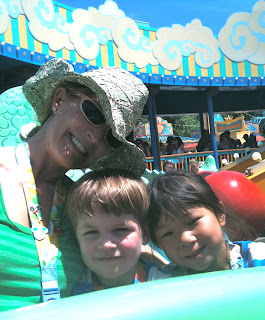 Cross-posted to No Hands But Ours.