The Biggest Tantrum-Thrower in the House

I’ve always tended to react to eveningsâ€”you know, after bedtime, when you regroup and try to figure out what on earth went wrong and how others could change to make it betterâ€”based on how the kids were. “Lily was in rare form,” I say of my girl with the curl right in the middle of her forehead. Or “Wyatt just could NOT leave Rory alone.” And I think of how things wentâ€”whether there were bedtime books, whether I’m glugging the Kahlua into my bedtime milkâ€”as completely a function of their behavior. 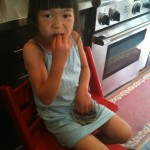 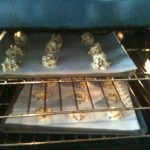 More dough in the fridge, too!

Chocolate-chip cookie baking (Mommy time for Rory while Wyatt had a playdate). 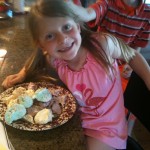 Nobody else can be in the picture! I made them!

Meringue-making (actually, “Princess Puffs,” thank you, cookbook someone gave Lily for her last birthday) by Miss “I can do it all by myself,” who didn’t realize I’d put the three egg whites required into the mixer bowl already and poured them all over the counter and the floor trying to put the bowl on the mixer. Also, dinner, and a big playroom and living room clean-up (no meringues until chores are done, and make your lunches too!) and the continued creation of our scale model of Spaceship Earth for Sam’s upcoming report on Walt Disney (about which, oh, my STARS, more later). 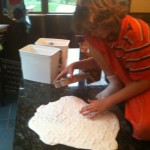 Imprinting the geodome-style pattern for the "golf ball." 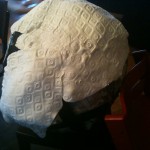 The ball is half covered. Sam is very happy with it. I am happy that he is happy.

This last involved Model Magic and a rolling pin, and everyone, but everyone, wanted in on the act. There was much rolling and squeezing as Sam and I dealt with various construction crises, all of which would have doomed the project for any less sunny child.

Rory was frustrating. Wyatt went to his room for some hitting/disobeying incident. Lily also went to her room, with the world’s easiest sheet of homework, and screamed and called her teacher a poopyhead over it for twenty minutes. Rob didn’t come home before bedtime as expected, and all of the various reading activities had to be coordinated under one umbrella–not a big deal, but unexpected and thus a potential minefield. I can report that it all went well, but not because the kids were any different than the kids usually are.

What was different is that I managed to keep my own temper in check all night. I realize I do not deserve a cookie for this. I get that this is no more than 99% of moms bring off daily, and that really, big-girl pants have long been in order. But I’ve been a long time coming to the “yo, you’re the adult, so be one” fold. And so I am proud.

By the time 8:00 rolled around, I wasn’t, as I so often am, snapping or shoo-ing or stomping or shrieking. I had not taken any of the various baddish situations and made them worse, as is my wont. I let what was happening happen. I let incidents unfold on their own time. I let the playroom be cleaned however they cleaned it. I let the model magic be the group project Sam didn’t at all mind it being. I let Lily put both butter and soy sauce on her rice.

And at the end of the night, everyone was much, much happier than we often are after 8 solid hours of Mommy duty. Especially me.

2 Responses to “The Biggest Tantrum-Thrower in the House”