My Only Good Example

by KJ in Feeding the Devils, Raising Devils

I’ve just finished reading Anne Lamott’s Imperfect Birds, which, long and very absorbing story short, is about an AA mother, her newly druggy teen and her writerly second husband, and how the mom and stepdad wise up to their too-clever daughter. On the surface. Under that, it is, of course, about a lot of things, and not the least is how crushed the mother is by how late it is with her daughter. She’s been her mother, and not always been great at that, and not, at least on the surface, done much else.

I actually often wonder what my kids will think of the memory of me. I don’t think they think much about me now at all, or at least, not me as me. They think of me as Mommy quite a bit. But what else will they remember me doing? Yelling, probably. Sitting at a computer. Reading? I think of myself as a reader, and I read a lot, but often on an iPad, which is indistinguishable from a laptop to a kid. I’ve vowed to return to print books and I have a fantastic pile of them going now. I’m going to make it a point to sit down with one in their view often, even though I don’t really expect to read it at that point (nor do I necessarily want toâ€”I get really lost in a book!).

But I am 100% sure they will remember me cooking. You know all the things you pretend to like to do for one reason or another (like watch hockey) or mostly like but don’t necessarily love (yoga comes to mind here) or kind of have to be pushed into doing? Cooking isn’t one of them for me. I really do love to cook, and I love to eat well, and so I cook, and we all eat well. 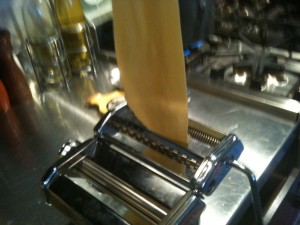 The pasta machine being its true self.

We eat our share of take-out and I have plenty of uninspired nights, but especially now, when afternoons tend to require that I be up and interactive but not necessarily doing anything particularly focused with the kids, I’m really cooking again. This indoor version will last about another month before it gets too hot to cook inside and then move out and onto the grill and the salad bowl, but still, I’m finally able to mix up and try new sauces and dressings and get really excited about even a mundane mealâ€”which is all that pasta turned out to be: spaghetti, with olive oil and parmesan, no more, no less. 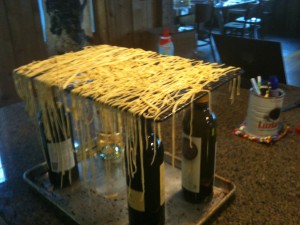 Who needs a pasta rack?

There is so much I am having a hard time getting right with the kids. Helping Lily to master her moods, which are so like mine. Convincing Wyatt to be Dr. Jekyll and not Mr. Hyde. Paying attention to Sam, who is so easy and can so easily not be heard. Giving Rory an underlying web of love that she knows is solid enough to bounce on. I think I’m blowing all that.

I guess we’ll always have spaghetti.

3 Responses to “My Only Good Example”