Privileges and Responsibilities, Part 462 (or thereabouts)

by KJ in Parenting on Track, Raising Devils, Virtual Twinning

In theory, our kids have responsibilities. And they doâ€”they pack and unpack their own lunches, they each have a weekly chore, they’re responsible for cleaning up their toys and getting their laundry in the bin. And, of course, they have privileges. We feed them, right? And take them places. And periodically buy them stuff.

We’ve been having some trouble, Rob and I, figuring out how those things were supposed to be tied together. Surely if you didn’t do your responsibilities, something should happenâ€”but what? We kept looking for consequences that were tied to the responsibility, rather than just a punishment. Fail to pack your lunch, and the consequence is obvious. But fail to put your breakfast dish in the dishwasher andâ€”what? Mommy tells you do to it or does it for you, that’s what. I though maybe it could mean I carried your dish upstairs and put it in your bed, but I’d still be the one who washed the sheets. Plus, mice. Then I thought, well, what if you always eat at the same place, and it’s still there when you go to eat again? That seemed like a decent plan, but I’d have to live with a house full of messy dishes all day. And what if you don’t care? Just like it’s cool with you to leave Lego all over the living room, because, if you’re five, why not? If you had your own living room that’s exactly what it would look like.

Apparently we skipped a key moment in the manual. In most families, that’s a joke, but yeah, we actually have a manual. When it comes to this stuff, we struggled for so long to get some rules and consistency going that we now rely completely on Parenting on Track to tell us what to do to teach the kids the things we already know we want to teach them. We know how to teach them a lot of things about become the adults we’ve become, but some things elude us. “Why you should clean up after yourself if failure to do so doesn’t lead to a punishment” was one of themâ€”until I read this blog post, from a fellow Parent on Track, and realized: all the privileges are tied to the most basic of responsibilities. The link doesn’t have to be clear. It’s more of a “you live in this house, you have responsibilities, and if you can’t manage them, we’re going to treat you like you’re too young to do anything” sort of thing. You just have to tie in something the kid thinks he or she is old enough to do. I can’t believe I missed this. I feel dumb.

(I also feel like I should be able to figure this out myself, but no. Left to my own devices, I either come up with dippy star charts and end up buying everyone cheap toys, or I just spend all my time yelling at them or punishing them. I can be a good parent on the upper level stuff, but this nitty gritty just eludes me.) 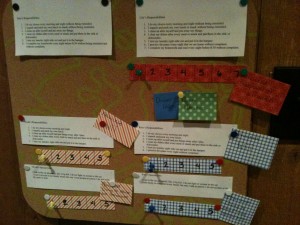 Behold, the Privileges and Responsibilities Board. 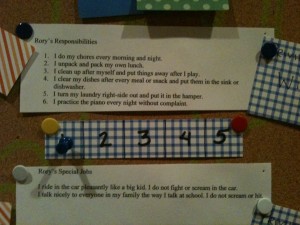 Wyatt's are the same, minus the piano practice.

If they can’t do it, they can’t play video games on the weekend. They love video games, and they’ve been allowed to play on Saturday and Sunday. I hate video games (well, not for me, but for 5-year-olds, although I owe this one a debt for being the first thing that every bonded the faux twins in cooperation rather than enmity). I take them away at every opportunity. They’ve lost them in the past for video game related transgressions (say “no” when it’s time to turn it off or get caught playing it without asking, and the whole house loses it for a week) but I never thought to link it to the other stuff, and I can’t imagine why not. It clearly makes sense to them. They didn’t question this for a minute. I’ve been so blind.

Both Wy and Rory also have a special job this week. They need to stop making me crazy. But that’s a little unclear (and hard to measure), so we put it a little differently. In essence, Wyatt needs to stop picking on Rory, and she has to stop reacting to him as though she’s been shot. This is a huge and old problem. You could argue that as the initiator, he’s to blame, but you’d be wrong. This is a game only two can play. If Wyatt brushes by Lily too close or pokes her in passing, she either tells on him or blows him off. Rory throws herself into a wailing, drama-filled explosion of emotion. You’ll scarcely be surprised that he then does whatever he just did (call her poopyhead, blow a raspberry in her general direction, hit her stuffie) again, with even greater enthusiasm.

They initiated this show in the grocery store Sunday, and now they’ve lost the privilege of going to public places until they can go five days without engaging in this dynamic. For the board, I told them no fighting, screaming or crying in the car (which they’d stopped after losing the privilege of riding in other people’s cars, but are on the border of starting again) AND they need to treat each other at home they way they do at schoolâ€”but they know exactly what it is I really mean. And there is no way they are going to have the Wii back next weekend.

As for the older kids, Lily’s dying to be allowed to sleep over at a friend’s house, so if she can meet her responsibilities for seven days (because she’s almost seven), she’s good. 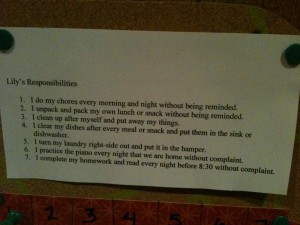 I think she’ll probably lose the privilege of going to other people’s houses at all by throwing a raging tantrum soon, but for now, this is her goal, and watching Rory and Wyatt wrestle with their demons will spur her to temporary good behavior.

That leaves Sam, and he’s a problem, largely because Sam makes a point of never being the problem. The whole point of this is that the “privilege” isn’t a “reward,” it’s something you’ve shown yourself to be old enough to do, and so you can do it. Lily isn’t working for one sleepover, but for me to say “yes” to all sleepovers. Once the Wii is back, it’s back, unless responsibilities go down the tube. These are your most basic jobs. Do them, and the real reward is more and harder jobs. The board is a reminder, no moreâ€”which it already is for Sam.

Sam does most of his stuff (it’s the same stuff as Lily, for now, with way more homework). He doesn’t necessarily do it without being reminded, but he does it. Cheerfully. Without complaint. And he’s responsible, so responsible that many privileges, like that of being able to walk from the other kids’ soccer practice to a friend’s house and be trusted to come back on time, are already his. Neither he nor I could think of an age-appropriate privilege that isn’t already given him, and so although I would like him to learn to meet his responsibilities without a reminder, I don’t necessarily want to take any of those privileges away in order for him to earn them back to get there.

And I don’t want to invent another privilege, like additional TV time, or any computer time, or (I considered this) the right to control the iPod in the car, that he hasn’t asked for. I might consider letting him earn the right to download some new songs to the family iPod for the master family playlist (I know, in other families, at almost ten, you have your own iPod and playlist, but not in ours). But again, he hasn’t asked. I did ask him: is there anything you want to work towards? Anything you want? I even offered to consider working for a reward for the more difficult task of completing responsibilities without a reminder. He said “No, I’m good. I think I’ll just do them.”

So I’m not quite sure how to push him to the next level, or whether, given that soon it will be summer and many responsibilities, although not all, will go by the wayside, I even should. Now Sam has no number chart, and no pushpin to move towards a goal. He’s in the happy position of having everything he wants. It doesn’t feel quite right to me, but I think that’s because Sam has naturally achieved a state of zen that I still only dream of. Long may it last.

4 Responses to “Privileges and Responsibilities, Part 462 (or thereabouts)”