When You Need A Special Shirt

Tomorrow is “field day” at Sam and Lily’s school. Lily broke down when she found that she was on the “yellow” team. She did not, she felt, know anyone on the yellow team! Or have a yellow shirt!

After some digging it developed that because tomorrow is also her birthday, she wanted to wear something special. Which would not be an old yellow t-shirt, or even a new yellow t-shirt. I wish, she finally said, I had a shirt like you got me last year. It was a pink dress, really, with a cupcake on it. It said “Lily 6.”

It seemed far too late for Lily 7, until I thought of iron-on letters. A trip to Jo-Ann today revealed very little. I hoped for bubble letters and a rainbow (I had a 1977 flashback thing going on in my head). I found lame, square letters in all of two colors, or this: 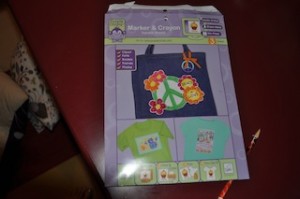 That'd be "print your own iron-on."

I was dubious. (And it took me three stores to find a plain yellow t-shirt) but kind of inspired. The package included a website (www.purplechimp.com) which billed itself as “a kid’s favorite place to create designs and decorate all your stuff.”

It was geared towards the average 9-year-old, and I did brilliantly. In just a few minutes I had this: 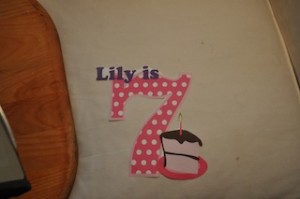 That's cut out of the printed sheet already, and laying on the sofa. Laying? Lying? Lain?

Which we added to this, thus: 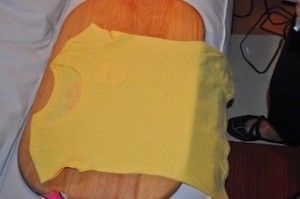 Plain t-shirt on cutting board for ironing purposes. 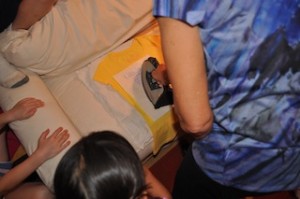 That is my mom, ironing. Did you think I ironed? I don't iron.

There were a few moments of tension. Would it work? I documented the drama: 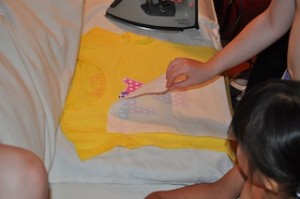 And then the perfect result. 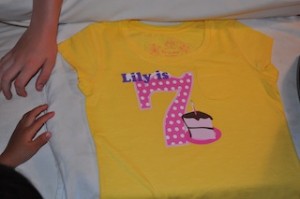 Can I just say I am unreasonably proud, given that this is clip art and a web program designed for pre-teens?

Later tonight or tomorrow I’ll post what Sam, who announced, after all this excitement and long past bedtime, that he neededâ€”and did not have, no way, no howâ€”a purple shirt. Let’s just say that if you saw them both at field day, you’d sure think Lily was my favorite kid.

3 Responses to “When You Need A Special Shirt”