The End of the [Year] is Nigh

by KJ in Life in a Northern Town, Raising Devils

Whose idea was it to pack June so chock-ful of events and then send them rocketing at me so fast? These two: 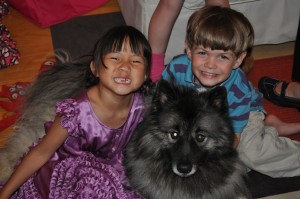 Just the human two, not the dog.

Had, of course, a concert. The night before Lily’s birthday party (I have never, ever been so happy to pay exorbitant-sounding sums of money for cupcakes in my whole life; it was worth every penny). They sang their hearts out for 12 songs (which was short, by Montessori standards) and are still singing them pretty constantly, especially the serious earworm one about the donkey in the black bonnet and the lit-tle pur-ple shoes.

This one had an Egyptian Museum: 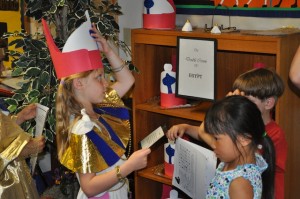 For which I signed up to provide “decorations,” only to realize, laterâ€”what? What constitutes an Egyptian “decoration” and did I think I had some sort of stash of mummies and sphinx somewhere I’d forgotten about? In addition to a small cactus (think desert, but not too hard, please) we provided our new friend: 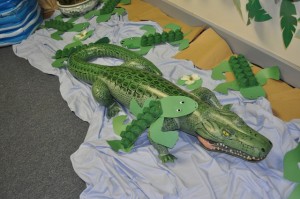 Lily and her classmates supplied the baby crocs.

Today was Lily’s field trip (sunscreen! bug spray! be early for school!) and Sam’s butterfly garden creation (I can bring compost! and Echinachea! (I can bring that, but I cannot spell it.) And verbena! And mint, dug up from our garden, yes, please, take it!). Also, apparently, Sam’s class picnic, for which I promised Rice Krispie Treats, but wrote them on the calendar as for Lily’s class, and then didn’t do that because I knew that couldn’t be right, they were on a field trip… I thought I had the day wrong, but no, I had the kid wrong.

Tomorrow is Rory and Wyatt’s class picnic and Sam’s field trip (ditto the sunscreen et al and an even earlier school arrival. Then they start messing with me on dismissal times, and Rory and Wyatt are done, and I don’t THINK there are any more anythings for which I have promised anything but God only knows at this point, because I sure don’t. Oh–pizza for Sam’s LAX team, Wednesday night. After I’m back from Boston. Because, what’s one more thing to forget at this point?