Everything in a Name

What’s in a name?
Everything.
Every thought your parents had about who you might be. A goodly dose of who your father’s family was, and possibly, depending on your circumstances, your mother’s as well.

If you’re adopted, what’s in a name?

Maybe everything, maybe nothing.

Casually (as in the non-legal name you’d give, say, a gymnastics class), Rory’s name says nothing much about her except that she’s the child of two people who liked the name Rory. Her name is unisex, and she os often assumed to be a boy. Her surname doesn’t reflect her ethnic appearance or biological heritage. I imagine that there will be times in her life when all of that is handyâ€”I, too, use a unisex first name and although my last name reflects my ethnic heritage, my appearance does notâ€”and there have been times when those things have worked to my advantage.

And I imagine there will be a time when she resents the whole thing.

Naming Rory, or handling her name, wasn’t easy. None of the paradigms about adoptee names felt right to us. When we decided to adopt from China, we planned to keep our adopted child’s name alongside an American name. That’s not how things worked out, and I wonder how she’ll feel about that one day.

American Family’s post on how she and her husband named the daughter they adopted from China, and how her feelings about that name changed once they found her daughter’s birth family led me to adoptee Mei-ling at Exiled Sister, an adoptee blogger who’s â€”among other things.** American Family’s post was about how, after living with their choice, she’d really like a do-overâ€”but only knowing now what she didn’t know then.

I don’t want a do-over. I still think we mostly did the best we could. I just wish that fate had dealt Rory a different hand. 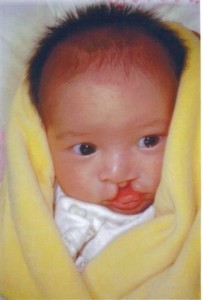 Someone didn't think she was beautiful enough or lucky enough for a special name.

Both of Rory’s names, in pinyin, are actually American words, but not words commonly used in a name, or that would be cool in a name. Her Chinese first name is an ugly one–ugly in sound, to American ears, but more importantly, ugly in spirit. Its most common meaning was twisty, or curvy, as in a twisty curvy road. Rory was born with a twisty, curvy lip. Chinese people we asked said it wasn’t a word usually used as a name there, either. Keeping her Chinese first name would have saddled her with a name that begged for mockery in both languages.

Rory’s Chinese “family” name didn’t, as some do, tie her to an orphanage or a finding year. It felt randomâ€”and unless we kept her Chinese first name, too, it made no sense to include it in her name. American readers wouldn’t see it as Chinese at all. (It’s “You.” That’s the pinyin spelling on all of her documents and the correct pinyin for the character.) From where we stood (and admittedly, that’s without full knowledge) keeping Rory’s Chinese name as part of her legal name would have complicated her life without really saying anything about her except that whoever found her saw nothing in her but a liability.

But we wanted Rory to have a Chinese name. She was born in China. She has family in China. That’s where she comes from and part of who she will always be. This is where many Chinese adoptive parents turn to nicknames.

There are so many Chinese nicknames that are entirely pronounceable and charming to American ears. Others are less easy to say, but nearly everyone I know (even those who planned to only give their child an American name) continued to call any adoptee old enough to recognize her name by whatever he or she had been called all of her life.

But Rory was called Rebecca. 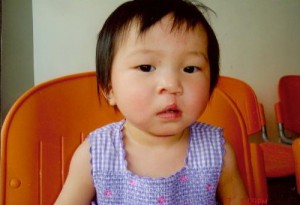 So there would be no Chinese name for Rory. We considered giving her our own Chinese name (and found some beautiful ones), but that rang false. Rory may be Chinese, but we are not.

So why isn’t she just called Rebecca? Here’s where you could certainly argue that we put our preferences ahead of her needs. Rebeccaâ€”well, we already knew a Rebecca. And it’s a very biblical name, coming into a very non-biblical family. My husband, especially, felt it reflected her intensely Christian foster upbringing. He wasn’t comfortable. Meanwhile, her foster family supported our changing her name. We were in contact with them for months before we travelled to China, and they offered to help Rory adjust to a new name by beginning to use itâ€”something they’d done with other families. 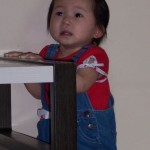 Bright, fierce and into everything.

We went through dozens of possibilities. Rory seemed to fit the child we’d heard about, the fierce, bright, determined, unique child in the pictures. It began with an “r” sound, like Rebecca. (Culturally, of course, it’s a terrible name to give a Chinese child, as no Chinese person will every be able to pronounce it. But so is Rebecca.) It fit in with the other names in the family–short, cheery.

In the end, though, we didn’t give her “Rory” as a legal name. Her foster family used it. We use it. But her legal name is Lorelei Rebeccaâ€”Lorelei for its beauty, its ease of pronunciation in Chinese, and its “Rory” nickname and Rebecca, of course, because it’s the name that her beloved foster family gave her. With no Chinese name at all.

I think “Lorelei Rebecca” is beautiful. Rory hates it. Calling her anything but Rory is a sure way to bring on tears (although she has finally accepted that the people at TSA are going to do it, and it’s better just to let it roll). She is NOT Lorelei. She will NOT be Rebecca. She is Rory and you’d better not mess with it. I imagine that she fears that if we begin calling her by another name, it would mark an impending new family, while a return to Rebecca might suggest a return to China.

Her attachment to her new name marks her attachment to us. It also marks how incredibly hard that transition was for her. Would it have been any easier if we’d simply stuck with Rebecca? Did changing her name make her feel like we were rejecting her past or her past self, or just add to the misery of an entirely new world and new life? I don’t know. Sometimes I blame myself for that, and sometimes I think her cup of misery was so full at that point that nothing else we did or didn’t do could have filled it further. I think she was at a moment in life when things truly couldn’t be any worse.

Rory’s name is not an ideal resolution to her naming story. What I’d wish for her is that her finding person had seen through to her beauty and spirit and given her a name that spoke to that. That her orphanage had a tradition of matching up surnames, so that hers would connect her to all of her cohort. But none of those things happened, and so Rory has a name that connects her to us and to her foster family, but not to the parts of her that came before that.

And there it is. Will she feel perfectly expressed by the name that all of that led up to? Surely not. Surely she will wish she was Jane, or Arabella, or Li-li, just as I, in my time, longed to be Katharine (Lily’s middle name), Sarah or Anne. And surely she will play out her own adjustments on her name, one way or anotherâ€”just as I did; KJ isn’t anything my mother calls me. And just as my mother did: she goes by a short version of her middle name. It’s a family tradition, this renaming and renewing and reflecting on who we are and what the sounds we’re called by say about us to our own ears and to others.

I believe in the power of names. Now, more than ever, as I interact with people whom I know only by their name, their work or emails and maybe a thumbnail photo, I find myself attaching attributes to people by their names, and who or what those names remind me of. Sometimes it’s good, sometimes it’s something to overcome, and there’s not much anyone can do about whether a girl named “Brooke” was really, really mean to me in 6th grade. (That’s “Brooke.” With an “e.” Don’t think I’ll forget it. Bitch.) But names matter. I’ve give Rory the very best one I knew how to give, for now. I know it’s not of her choosing, and if, later, she wants to choose differently, I’ll happily buy her some new stationary. But just like my mom still calls me “Karin,” and her mom insisted on “Jody,” I’ve got to admit she’s always going to be Rory to me. 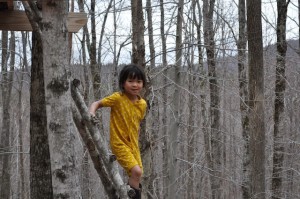 ** Mei-ling at Exile wrote to tell me I’d misinterpreted her post. I thought she was unhappy that her parents changed her name, but her feelings are much more complex than that. She’s trapped in a Western name that doesn’t fully fit her but wouldn’t feel right with her birth name, either, and it’s really the factors that leave her feeling un-represented by either name–because she can’t be fully Western or fully Chinese–that leave her unhappy. I hope I’ve explained that well. It’s an extra-ordinarily complex thing, identity, and names are only the outer shell of it.

10 Responses to “Everything in a Name”