The Family that Bikes Together

by KJ in Life in a Northern Town, Raising Devils

I’ve been all worried about my own balance, but we’ve achieved some very important OTHER feats of balance around here: 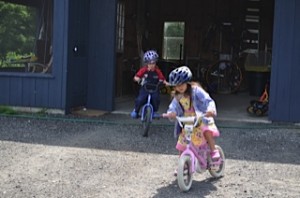 Rory and Wyatt are both officially bike riders.

This is big news in a family where biking counts. The VT 50 for Rob (50 miles of mountain biking). 50 in the Prouty for me and Sam, once with him on a tagalong and this year, I think, with him on his own wheels. Last year he did 35. Mountain bike camp for Sam. Road bikes, mountain bikes, in-between bikes–we even have the double tagalong for two to ride: 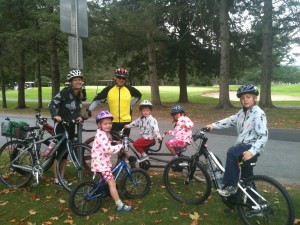 The Family that Bikes Together

I hate pulling the double tagalong, actually, but it’s better than not riding.

And I always want to ride. 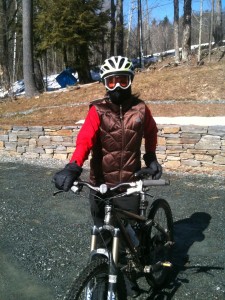 I won't go out unless it's at least 40 degrees, though.

Biking is maybe even stupid important in our lives. To me, and to Rob, biking is what proves that we can have four kids and still do everything we want to do, even though we patently can’t. This leads us to do extraordinarily stupid things, as when we returned from China on, I think, a Wednesday and rode 25 miles in the Prouty (which is a ride in support of cancer with a variety of routes ranging from 200 miles down to 19) on Saturday–with Rory and Wyatt in the baby bike trailer (we didn’t have the tagalong yet, and they would have been too small anyway).

We did this because we are stupid, and because we are stubborn, and because we never miss the Prouty, never, and everyone said we couldn’t LEAVE Rory, not so soon after we got home, so we handed her a bag of Doritos, buckled her in next to Wyatt and left them to battle it out. One or the other of them was screaming for about 19 miles. There are no pictures of that. Because it was stupid. Did I mention stupid?

We were even stupider (I know, more stupid, but if you’re the stupid one, I think stupid is a fine word) two months later when, after acquiring the double tagalong, we implemented it in a 19 mile “Tour de Taste” for Rob’s birthday. Rory rode solo on the single tagalong while Rob pulled the double with Lily and Wyatt, and sheâ€”still exhausted on a daily basis just from the stress of dealing with us, and English, and life in generalâ€”was good for about fifteen, because she is a really good sport. Then she fell asleep, on the tagalong, over and over again, with us waking her up and hollering and pouring water on her and just in generally being the worst possible human beings because we somehow felt we had to complete our circle instead of, duh, having Rob ride ahead and come back with the car.

We thought she’d stay awake after the water.

We don’t have pictures of that, but we do have this lovely one of what Sam looked like after Rory fell off and so he rode ahead trying to catch Rob and get him to turn around and help meâ€”and then he fell off. 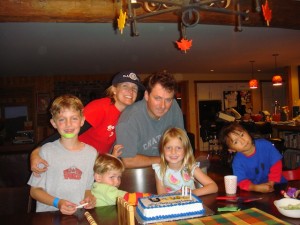 Rory's wounds were all on her leg and hands. She still has a scar.

And yet we still bike. And Rory and Wyatt are determined to keep up. Rory rode to victory first (hardly surprising, given her amazing balance) and Wyatt could not let her beat him. And once they took off, they kept going. 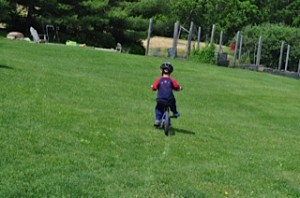 It's a mountain bike, right?

Even with all the disasters, all the kids clearly think of themselves as once and future cyclists. They caress the bikes in the bike store with passion. Turn the pages of Bicycling Magazine. Beg for more and longer rides.

Even after you fall off and get back on (although we did NOT make Rory or Sam get back on after their double crashes that September), biking is fun. Maybe it’s the falling off, surviving and getting back on to bike another day that makes it fun. The picture with all of us, above, is us doing that same ride the kids fell off during the year before, and not one of us, not once, suggested not going. For last year’s Prouty, it rained so hard a friend’s kid wore swim gogglesâ€”and all four of us who’d planned to ride slogged along for 35 damp miles. 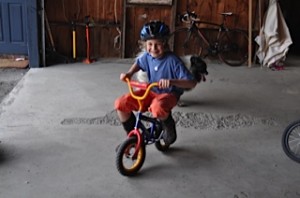 Not only that, but you can ride just about anything.

3 Responses to “The Family that Bikes Together”