Again I Make the Pasta!

by KJ in Feeding the Devils, Raising Devils

I think we’re going to be eating this all summer long. It’s far, far easier than it looks. Yes, I make my own pasta noodles. It’s what takes it from good to insanely spectacular.

Four eggs, about 2 1/4 cups of flour, in the mixer, then with the dough hook, then kneaded on the counter: 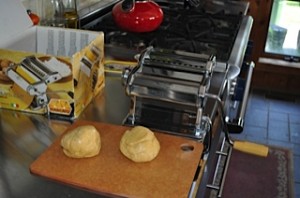 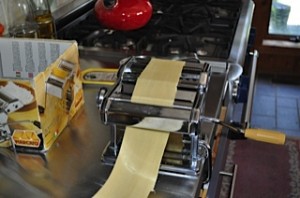 I managed to roll without any little helpers this time. You'll see why in a minute.

I find it’s better to let the sheets of dough rest and dry a little (as in, five minutes, while rolling out the rest of the pasta) before cutting them into spaghetti. 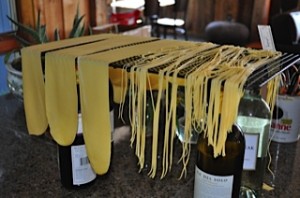 Dough resting next to spaghetti ready for the pot.

I don’t actually have room for all of this on my fancy pasta dryer (four wine bottles and a cookie rack). 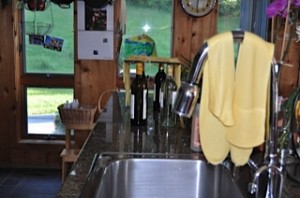 This was really not a very good improvisation, as it made it very hard to use the sink.

Delay of game while I go replace the bike chain from one of my new bike riders (see below). And now I really need to use the sink.

I really, really need to use the sink.

Spaghetti made, it’s time to chop the tomatoes and the mozzarella (this is only going to get better when we have our own tomatoes). 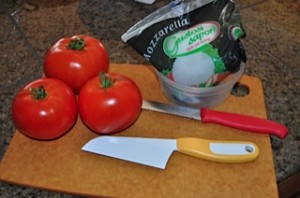 I was gonna crow about my local meal, and then I realized I bought the imported bufalo mozz instead of the almost equally yummy local stuff. Shoot me.

Boil spaghetti (in water with LOTS of salt), strain, dress with olive oil, add tomatoes, mozz and a little basil (I tossed in a little Parmesan, too), lots of fresh pepper and:

Yeah, I chopped the basil after I took the picture. But doesn't it look pretty?

Best meal ever. I’m hungry again, blogging about it. A hit with all kids, although Rory said “Can I just have noodles? Well, ok, I just try it…Can I have more that? And that? I love dis!” and Lily said “I hate it. It’s awful.” and had to leave the table, because Wyatt and Sam said it was the best thing they had ever eaten and she wanted to be contrary. And then she ate the whole bowl. Mmmm…

One Response to “Again I Make the Pasta!”