There’s Something Familiar About This Place 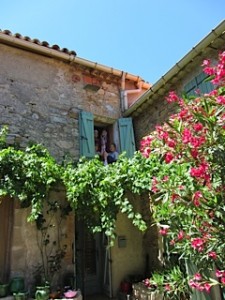 Most picturesque vacation ever.

Weâ€™ve done the drive from Barcelona to Cazo before.

As we headed into Narbonne, Rob reminded me that weâ€™d missed the turn in some way last time. â€œThatâ€™s how we ended up at the Carrefours, remember?â€

I did, and although weâ€™d liked the Carrefours, with all four kids asleep in the back of the car in the middle of the day and Rob and I each running on about an hourâ€™s poor sleep on the plane, this time, even more than last, we just wanted to get there. 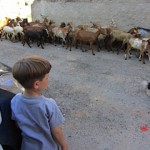 Wyatt watches the goats go out.

There is a tiny hamlet outside of a tiny town youâ€™ve never heard of: Cazo is perhaps six houses, a community under the auspices of St. Chinian in the Languedoux Rousillon. We rented the house (700 years old and just renovated enough) from neighbors of ours in Vermont who share (and may perhaps top) our appreciation for bike-able back roads, a barn full of goats that meander out along the dirt drive daily and an area far more about hiking and swimming and eating than shopping or museums. Rob and I came here with friends last fall, and Iâ€™ve been dying to share it with the kids ever since. 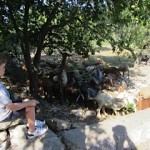 Did I say goats? I didn't mean to leave out the sheep. 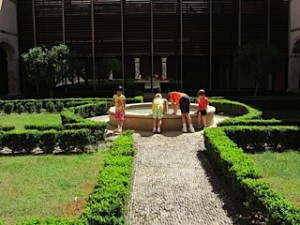 I know where the towels are and that there is a market basket behind the laundry room door. I know how to open the tricky door to the back patio. I know to watch for goat and herd dog poop on the walk in. I know where the refrigerator is, and that when we get here, we need to make sure itâ€™s turned on. The soft dampness of sheets in humidity feels familiar and the scent of the must held in by the old stone walls is the smell of all the fun we had cooking, biking and flipping over Scrabble tiles last time around. 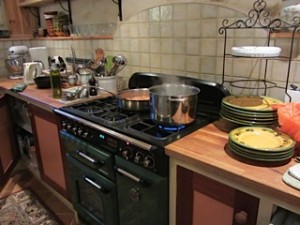 I know where everything is in the kitchen!

I donâ€™t have a very good memoryâ€”meaning that if you asked me about that vacation, Iâ€™d offer up a few vignettes, many formed around photographs that have lodged in my mind. But when I come back, it comes back too.

And Iâ€™m completely excited to share the things we love about this place with the kids. I thought about them so hard when we visited a particular castle last year (Carcassonne, the most tourist-y thing weâ€™ll come near all week) that I feel as though theyâ€™ve already been. Roman ruins will be more fun with someone whoâ€™s studied the Romans within the last decade. The halting conversations Iâ€™m able to have with the locals will be better with kids to break the ice. And I hope theyâ€™ll feel that whatâ€™s special about Cazo is a lot like whatâ€™s special about where we live: itâ€™s still itself in a world thatâ€™s getting, as the saying goes, flatter and samer all the time. There is no McDonaldâ€™s, no Starbucks (not that I donâ€™t love Starbucks) and thereâ€™s a huge community of people whose people have been there forever and who seem happy to stay put in the same place, doing the same things theyâ€™ve always done, hollering out at each other from passing car to sidewalk cafÃ©. It was all a little dead at the end of October, the way towns where people go inside for the winter get, and this time it looks to add a holiday feel thatâ€™s going to make it even better. 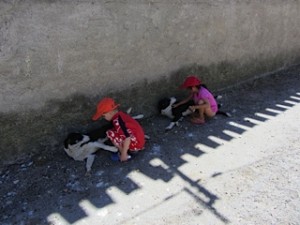 The dogs of Cazo, off-duty.

I love a good city, too, with constant change and motionâ€”(and like I said, I dearly love a good Starbucks). Weâ€™re going â€œbackâ€ to Barcelona, too, to the same hotel we tried last time (guess youâ€™ll never call me a new thrill seeker), but this time to see the city. Last time it rained so hard we never left our hotel (we were only there one night). So Iâ€™m adding a little new to my little bit of familiar, all starting tomorrow, as soon as I can get jet-lagged kids whoâ€™ve napped all day to go to sleep in a place thatâ€™s got a delightful tough of familiarity for me but nothing like it for them and is, with its 700 year old stone walls, a tad creepy in spots. Iâ€™m so excited. I love the beginnings of things, too.

The biggest problem with being a return junkie? Iâ€™m already wishing we could come back every year.

One Response to “There’s Something Familiar About This Place”