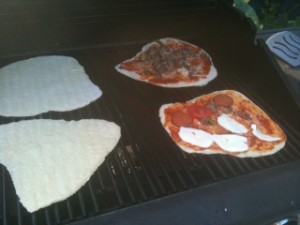 Good on the Grill.

There was much confusion surrounding my new version of make-your-own-pizza night.

We’ve been into make your own pizza every since I spent an evening standing in my buddy Jess‘s kitchen while she rolled out pizzas and I ate all her pepperoni while thinking, “this is a really good idea for dinner.” I think we’d had pizza weekly since, BUT (and it’s a big but) we have no air conditioning.

You really can’t cook pizza in your oven with no a/c in the summer. Pizza on the grill immediately struck me as an excellent idea, but everything I read made it look hard. There was lots of banking of fires and temperatures and complications. And then Tricia blogged this tasty looking example, and it didn’t look that hard. Then another friend said she’d been at a party with grilled pizza last night, and all she and the host did was to grill the crusts on a hotter part of the grill and melt the toppings on lower heat. Which sounded like a job for my gas grill. I’m generally a charcoal girl, but you can’t deny the gas comes in handy if all you’re really doing is replacing the stove. 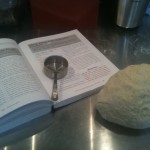 So I produced my favorite pizza dough, the one with the cornmeal. Let it rise in a warm place (that was easy!) while I put together the toppings.

First, the basics: pepperoni. Italian sausage. Mushrooms. Sauce. (Same pan for all: sausage first, then mushrooms, then warming the sauce). I did make the sauce–which is to say I seasoned and pureed a can of tomatoes–but I made it last time and put it in the freezer. So that was easy, too. 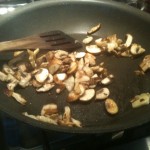 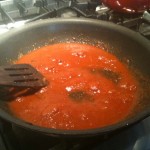 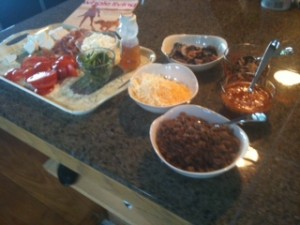 I laid out the toppings all pretty. On the grown-up menu, we had feta cheese, figs, prociutto, asparagus and honey. Also mozzarella and tomato, except that the kids snagged all the good mozzarella before I made our pizzas, so we were a little gypped on that front.

I let anyone who wanted to play with their dough a bit before I rolled it, and thenâ€”-this is where the confusion set in–I took the dough out and grilled it. Usually, we put the toppings on first, of course. For this version, the nice flat dough goes out, gets lightly grilled on both sides, and then returns to the child’s hands for the decorative elements. 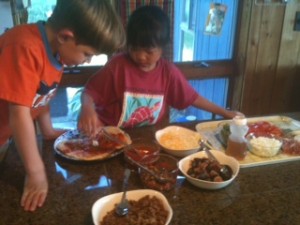 Then the pizzas went back on the grill for a final melt. Then Wyatt’s went, face down, on the patio, thanks to some Harry Potter move Lily was performing with a broomstick. Then Lily (after one or two additional antics) went to her room while Wyatt made another pizza.

Then we chowed. The toppings slide off rather readily if not thoroughly cheesed-on (none of the kids had this problem) and one of the crusts gained some extra crunch, and I’m not sure pizza is really quite the right word for it. But tasty will do. 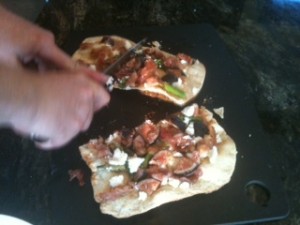 The fig version, tasted and rejected by all four kids. More for us!

One Response to “Grilling the Pizza!”