I suppose there are a couple ways in which being so much like me won’t work totally to her disadvantage (although I still think she inherited all of my very worst characteristics), and maybe this is one of them. She had an idea about marshmallow popsicles. Her vision was, I think, that we would melt marshmallow and reshape it into, well, different shapes. I’m not sure how she planned to hold the shapes together, but somehow the shape would go on a stick like a lollipop and then she would freeze it.

I melted some marshmallow for her, but her plan did not work, and so she went to plan B: dipping a marshmallow IN marshmallow and then in melted chocolate and sprinkles and putting THAT in the freezer. She also decided that letting Rory do it too but only if Rory did everything EXACTLY like Lily said to do it (which, when Wyatt is not around, Rory will do, although not without complaint) would be more fun that going it alone.

And while we were melting marshmallow I made rice krispies and they made pops out of those too, although Lily was much less satisfied with that because some friends of ours had done it recently and so it was not all her idea. Lily will never have lemming issues. 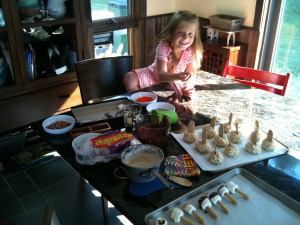 Lily is incredibly anxious to have things be just hers. Not so much physical things (that’s Rory’s domain) but things to do. She wants to do things with me, just us, and that’s fine. She wants to have a playdate with a friend, just her, and that’s fine (and nearly always ends up including a sibling or two after a while anyway). Wants to have a friend sleepover and NOT bring her little brother for Wyatt.

And she wants to do gymnastics–I’m not sure why–all by herself.

Offered choices of soccer and tennis, Lily was emphatic. She wanted to do gymnastics, and only gymnastics, at one particular place. Not because a friend does it. Not because she’s ever shown any real interest in cartwheels. Not because she loved it on any of her prior efforts. But fine, gymnastics, we can make that happen. And, hey–you know who DID love gymnastics? Rory! Rory and Wyatt, who can both monkey bar terrifyingly across anything and gather crowds every time they climb a tree. And it just so happened there was a class they could do at the same time as the class for Lily. They weren’t enthusiastic (they want to do soccer AND tennis) but I thought, meh, we’ll just do it (and not tennis) anyway and they’ll like it.

Lily was infuriated. “I just want to do it! Just me! If they’re doing it I want to do ballet!”

Her dad was infuriated with her. How can you be so selfish? But I understood. Lily is so in the middle. She has no obvious special thing going–she’s not the only girl, or the oldest, or the youngest, or the Chinese one. She hasn’t really clicked with any activity or sport (and sadly if she’s like me, she will drift from one to another, never setting on anything long enough to get good at it). If anything, she’s Lily the difficult one, and as much as she seems to cultivate that role, I don’t think she really wants it.

And so I took Rory and Wyatt out of gymnastics. 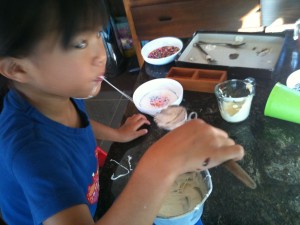 Rory made out ok, though. At the end of Lily’s project, Lily let her eat all the leftover marshmallow. Lily also gave her all the sprinkles. After lots of initial enthusiasm, even Rory’s sweet tooth was overwhelmed. She had to agree that too much of anything was not a good thing, although I think it pained her not to eat every last sugary drop.

One Response to “Lily’s Project”