The Unexpected Dividends of Switching It Up 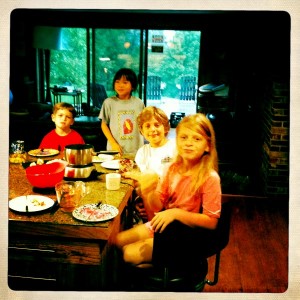 On this rainy Labor Day, books were read, games were played, video games were played, Lego models were built and various and sundry this and thats and whatnots occurred, and suddenly it was 5:30 and no plan had been made for dinner (which, of course, really means that I hadn’t thought about dinner.) There were boxes of fondue in the fridge, and already sliced fondue bread in the freezer (from a party that took place last November, but it’s the freezer, right?). There were apples. We had fondue with bread and apples for dipping, and because the fondue pot plugs in (which sounds like a good idea but is kind of a mixed blessing) we ate at the kitchen counter, which we’ve never done all together as a family before.

The kids, leaning over the pot, were startled. We’re eating here? We are. But you and Daddy don’t have a chair. We can stand. Is this all we’re having? It is.

And then, even though there was only one pot of cheese, even though we all had to lean over one another, wielding pointy forks and drippy cheese to get at the bowls of bread and apples and at the dip, we managed to have what I think must have been the single most amicable, friendly, chatty meal we have had in, possibly, forever. No one argued over passing food or getting enough. No one objected to anyone else putting his or her feet on his or her chair. There was none of the usual competition to gain parental attention, which is also associated with insanely bad behavior in order to regain such attention when it is lost to another.

I don’t know why not. I don’t know if it’s that fondue is a particularly active meal, requiring constant attention to one’s food, or if it was moving dinner to another location, or is the stars just aligned. Whatever it was, it was fantastic, and especially coming as it did at the end of a full day of family indoor togetherness (not usually our best time). I don’t know if I can count on fondue to make the magic, but I know I’ll be trying, week by week, to make whatever it was happen again!

3 Responses to “The Unexpected Dividends of Switching It Up”