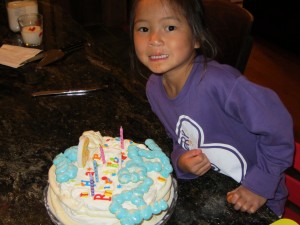 I am so insanely proud of this perfect cake (see the below post).

Rory’s birthday was Friday, actually. (I think I begin to see why that word showed up in my wordle.) And it was also a little bit Saturday, when we skyped with Grandma Jo and opened HER presents, and then it will be a little bit Monday, when we take treats to class because you cannot take treats to class on muffin day, seriously, people, what are you thinking? It’s muffin day.

And then even more NEXT Saturday, which is her birthday party because her Mommy did not get her act together and rent the bouncy house at the rec center in time, and also because her Daddy has to be somewhere for several hours, and rather luckily, anyway, because her sister barfed Thursday and you know, there’s no telling what could be next. So. One spread out birthday. Our birthdays always seem to have a lot of drift to them. More to celebrate, I guess. Or more to clean up. It depends on how you look at it.

But as for Friday: Rory. Six. You know, when we adopted her at three I never really thought she would actually turn six. Six is pretty old. Six is real kid material. Six is serious.

Rory makes a delightful six. She’s SO DIFFERENt than she was a year ago, let alone two years ago. And yet so much the same. She has so much more to say. So much more ability to say it. She’s this complete mixture of independence and wanting-to-please and love and uncertainty, still. We’re having hugging lessons, because she still stands stock still to receive her hugs. Rory really likes hugging lessons. 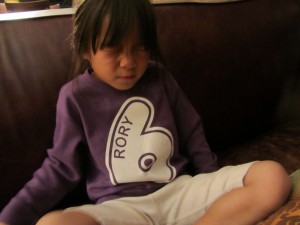 Here she is waiting for her presents. Close your eyes! Keep them closed! 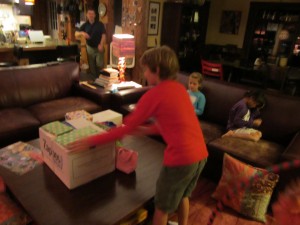 Rory had a pretty decent haul from her loving family. The hula hoop is from Wyatt. 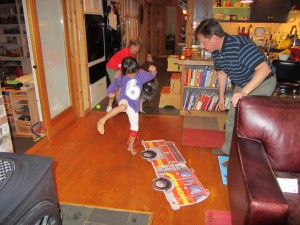 When I was little, these were called "lemon twists." Now it's a jingly ball. I liked the lemon.

The jumping ball is from me. From Sam, not pictured except above, “wrapped” by Sam in the giant Zappos box, is a crayon-melty maker machine. From Daddy, also not pictured, a Wii game. It’s from Daddy only in the sense that when she unwrapped it, we told her it was from Daddy and she bought it. Daddy has been moved, once in a while, to buy a present himself, but this time I was in charge. I did good. 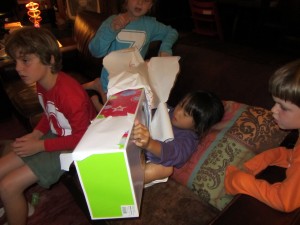 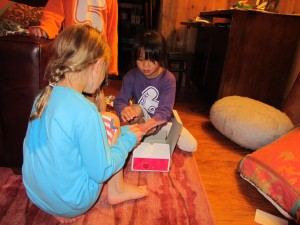 And, of course, soccer clothes for the above American Girl doll.

I was a little dubious about the doll. I knew who wanted the doll, and I wasn’t sure it was Rory. But I was wrong. Such is the value Lily places on the dolls that even Wyatt has one (the only boy available, a “Bitty Twin”). And plays with it with her. Rory seemed thrilled. I thought she’d prefer the ball, or the Wii game (and she DID love the Wii game), but the doll, with Lily’s help and without, was a hit. The best moment was probably when she opened it and Wyatt squealed “A look like me doll!” I think Wyatt would like a a Look Like Me doll, but I guess that’s not American Girl’s thing.

It does look like her, especially if you’re willing to concede that Asian eyes are just exactly the same shape as Western ones. Kinda.
I also gave her a Moshi Monsters sticker book and a stuffed Moshi that looks like her Moshi, which will mean nothing to you unless your kids do Moshi Monsters, which, in spite of them having something like a zillion members, no one else’s kids do.

And then, because we do things backwards, we had dinner. And then cake. Was it a good birthday? 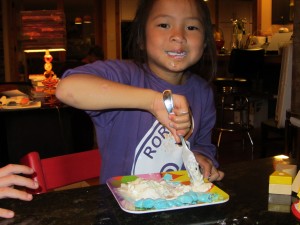