I was all, dude, that’s going to be so messy.

But frankly the pumpkins were messy enough. As usual, my eyes were bigger than my carving stomach. We had a TON of pumpkins to carve. 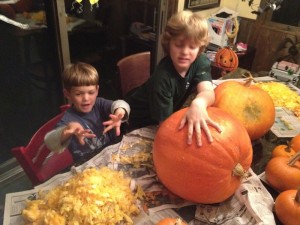 "I try not to think too hard about how gross this is." It would be so much worse if it was a penguin, though.

Fortunately Sam turned out to enjoy gutting them nearly as much as he did carving the faces. And like so many things, pumpkin carving is easier but still not precisely idyllic when your youngest kid is five. They need help with their own pumpkins, but not that much help, particularly if, like me, you’re not that picky about the end result. Or worried about fingers. We ended the pumpkin carving session with the same number of fingers we started with, by the way. 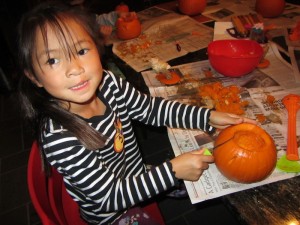 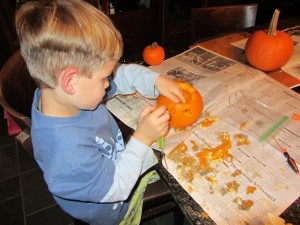 "This is my so teeny one pumpkin."

Hey-if you send pics of your carved pumpkins to my friend Pam at Nomad press, you’re entered into a contest to win some of their great books (they do some super non-fiction stuff with great illustrations.) Send your pictures here. That sounds super cheesy. She really IS my friend. And they really ARE good books. 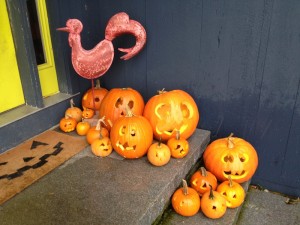 4 Responses to “Carving the Pumpkin Harvest”