by KJ in Connecting the Dots, Motherlode, Raising Devils 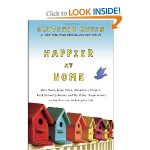 You can’t really click to look inside, I was just too lazy to use my own image. You can, however, click the name of the book in the post to get to Amazon and buy the book.

Motherlode sneak peek: Next week, I’m going to Boston to meet up with Gretchen Rubin and record a video introduction to a series of posts she’ll be writing for Motherlode starting 9/17. Like so many of us, I found a friend when I first opened Gretchen’s book “The Happiness Project,” and when that words-only friend turned into an actual live friend (at the ASJA conference) a while ago, that was even betterâ€”especially now that it means Gretchen will be writing a weekly Motherlode post this fall. (About what? That’s the only part I’m not going to tell you here.)

Since Gretchen’s writing for me, I thought I’d turn the tables and write, well, not “for” her but “inspired by” her. I know plenty of people started their own “happiness projects” after Gretchen’s first book. I did nothing so official, but this time, perhaps instigated by the fact that her very first topic in “Happier at Home” is something I know would make me much happier if I could just get a grip on it: clutter.

Ok, Gretchen doesn’t call it clutter. She calls it, rightly, “Possessions,” and that just puts a much happier spin on the whole thing, or at least it would, if my “possessions” weren’t so buried in my clutter that it’s become very hard to tell the difference.

I’ll blog my own “Happier at Home” project, which conveniently enough Gretchen began one September, every Sunday night along with my now-weekly Motherlode sneak peaks (and probably the occasional mid-week picture update of my, um, progress).

Gretchen started her latest project with “Possessions” because she’s smart enough to know that the clutter isn’t all there is to her relationship to her stuff. “My possessions had a powerful influence over the atmosphere of my home, and they contributed to, and reflected, my sense of identity,” she wrote.

I know what she means. I battle the clutter and mess of two adults and four children with an abundance of identity in the form of books, toys, magazines, newspapers and small, indeterminate but invariably important plastic objects (whose importance rarely becomes clear before they’re thrown away) daily, but the clutter isn’t all I’m dissatisfied with as I survey my domain. We just don’t live, physically, they way I want to live, or even the way we want to live. It’s pretty depressingly Tobacco Road around here, and I suspect the friend who just sent me an email about her new no-filter fish tank may have been commenting on our tank, which has been fish-free and filled with evaporating water for months. (Ok, maybe longer.) 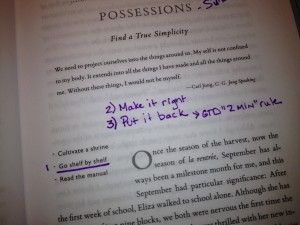 Gretchen’s goals, and mine.

Gretchen’s goal was to “Find a True Simplicity.” Mine is to Cultivate an Ordered Calm. “Simplicity” will never reign here; I like clear surfaces but I also like books and magazines and easy access to things we love and use, and a few toys here and there don’t bother me as long as, if the spirit moves the child to put the toy away (and my “spirit” I mean “allowance” or possibly “threat”), there is a clear place to put it.

I’m adopting Gretchen’s second resolution, “Go shelf by shelf” as my first. My goal is to remove and clear, and to keep only what I “know to be useful, or believe to be beautiful,” with an eye towards finding a place for everything that remains, even if not everything is in its place.

It’s not at all realistic to expect that I’ll have gone “shelf by shelf” in our 4 bedroom house by next Sunday, but I’ll at least write about where we stand, and whether the bookshelf I took out of the guest room upstairs and then couldn’t find anywhere to put except the hall floor is gone, next Sunday. Beyond that lie two more resolutions for September: Make it right, and Put it back.

I want to do more than clear the clutter. I want to get what stays behind right: to finally replace the kitchen soap dispenser and repair the broken dresser drawer and put all the pieces in the Monopoly game. That, to me, is “make it right.”

And then I want to learn to keep it that way. “Put it back,” means more than that. It means embracing David Allen’s requirement that if it takes less than 2 minutes, you do it now by putting the tape back after wrapping a present, or picking up the clump of hairbands and replacing them in the box instead of dropping them in the nearest bowl. If I’m going to be happy with my possessions, each thing needs a place, and I need to make a habit of resecting those places.

Honestly, I go into this discouraged and overwhelmed. We’ve been letting things pile up for the five years since we moved into this house, and we have both had to accept of late that the children never put anything away because we rarely do: yep, there are six plastic spaceships and a half-built lego on the coffee table, but then, there’s a Sunday times and an open notepad (mine) next to them, and the bag I brought out yesterday to dig out hand-me-down soccer cleats on the floor next to it, unreturned to its place, and next to me on the end table is the squirt bottle Rob used to squirt the dog for barking at the UPS man on Friday.

A sneak peak of hall chaos.

I set out to clean the hall today, and mostly just stood gazing miserably, knowing that I can’t really clean out the shoe cubbies unless I pull out all the outgrown shoes, and I can’t pull out the outgrown shoes without something to put them in, and then I will need to take the ones that aren’t handed down somewhere and put the ones that are somewhere else, with a label and the hope of finding them in two years (girls) or four (boys). And that’s just the shoes; there are jackets and rackets and swimsuits and kites and backpacks and hats…

I finally managed to open the four elfa drawers that store up the projects children bring home from school all year; in a happy, ideal family, one goes through these at the end of the year, pulls out treasures, tucks some away, frames a few pictures and talks to each child about his or her school year. Instead, I dumped last year’s contents into the four bins I keep their artwork in in the basement without a word while three were out with various friends and the fourth played Minecraft. Now they’re empty and ready for 2012-2013, filled only with my intent to do better next year and the near certainty that I won’t.

I’d hoped for before and after pictures of a hallway transformed, but instead, I realized I needed the bins I keep Sam’s clothes in upstairs for mittens, etc., which meant taking Lily’s doll clothes out of his old dresser and giving it back to him and then switching the bins currently in the hallway for swimsuits up for doll clothes and…well, long story short, all the bins and the dresser are empty; the swimsuits and Sam’s entire wardrobe are in various piles, and it is all much, much worse than it was when I started.

What is it Gretchen always says? Happiness doesn’t always make me feel happy. But it really, really will feel so good when it’s doneâ€”and making the mess guarantees that one way or another, I’m going to have to pick it up!