Mob Scene in the Forbidden City 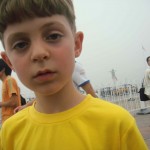 In front of Tianamen Square 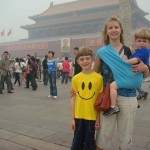 In front of the Forbidden City 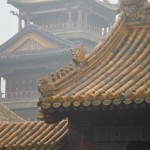 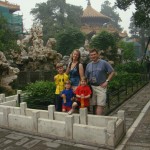 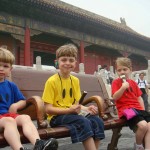 Ice Cream in the Forbidden City 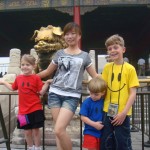 Here’s a phrase you may want to learn if you’re going to bring a lot of small, blonde children to China:
Ta-men pu yao.
That’s “They don’t want it.” Ta pu yao is “He doesn’t want it.”
The smog today was palpable, settling down in the Forbidden City to the point where you felt like you needed to clean your glasses, even though you weren’t wearing any. It was muggy, cloudy and oppressive. While we walked to the Forbidden City we were picked up by two students, who said they were practicing their English, but turned out, after many blocks, to want us to go into their art store and buy some of their art. So that was a little disillusioning right off.
The Forbidden City is huge, a never-ending maze of storybook buildings with nothing in them, of empty, brick-paved courtyards with nothing in them, of stages and halls with…nothing in them. Eventually, as you make your way in, you reach the Imperial Garden, which is truly magical, and some buildings with–after you peer through the dusty windows–a few scattered things in them. And there were some thrones. All of which sounds like I wasn’t impressed, and I was. It’s awe-inspiring. It’s just not very evocative of its history. It’s hard to imagine it filled with concubines, eunichs and emperors and bustling with life, and very little has been done to help you do that.
But why the phrase?
Every time we stepped away from the kids to take their picture, other people gathered to take their picture, too. And then they moved in, to stand with them in a picture. And then they got closer, petting their hair and holding their hands…The first time it was funny. And the cute girl you see posed with them, here? She was very nice, and I think everyone should take a tip from her when it comes to posing for pictures. I took this shot just to prove to you all that it happened. Turns out, I’ll have plenty of opportunities to prove that! It got ridiculous quickly. Every time we stopped, they came. Everytime we tried to talk to someone–other parents encouraged their little ones to try out a “hello” and we would encourage ours to try a Ni hou-ma?–a little crowd would form, and if one person took a picture, there were others right behind. A couple of times, when they posed for us, people moved in before we could get them away. Wyatt really didn’t like it. Lily was flattered but overwhelmed, and Sam wanted to be polite but not necessarily to sit there all day.
We did start to say no, and walk away, but still got caught a couple of times. Eventually someone knocked poor Wyatt down while he was running away from a photo fest, and I realized we needed a polite but firm way to explain–he doesn’t like it. They don’t want it.

It turned out to also come in handy on the way out, against the hoardes of sellers of Chinese flags and olympic mascots.

Why the photo taking? I don’t know. Our guide book thinks it’s mocking–take them home and show friends who haven’t traveled so far the funny looking foreigners–but with the other parents, and the grandmother types, I didn’t really get that. It is a little–condescending is the best word I can get for it. Why should the laowei care? Like going on safari and taking a picture with little native children, only kind of in reverse.

You can see that by the end, I had to scoop Wyatt up and put him away. (He was also very tired–they walked all day.) He was the primo target–every Chinese grandmother or 20-year-old girl just wanted a piece of him. What they really wanted to do was hold him, but he was having none of that, and we backed him up absolutely. Even Sam, though–he’d just be walking a long, and somebody would put their hand right on his head. I warned them–we knew this would happen–but it was that much more intense than we’d expected!

Tonight we’re off for Peking (Beijing!) duck at Made in China, which is in our lovely, lovely hotel. Where no one yet has tried to touch the kids’ hair!

5 Responses to “Mob Scene in the Forbidden City”