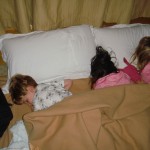 Asleep (for a while) in Guangzhou. 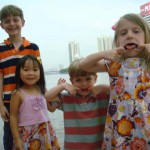 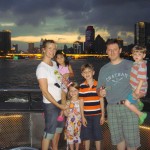 3 happy kids on a long-promised boat ride on the Pearl River. Yes, I said 3. 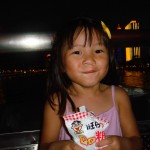 I will only smile if you give me “tandy.”


Full disclosure: Lorelei Rebecca Seelig, fka You Wan Rebecca, has had more sugar in the past week than in her entire previous 3 year, 9 month life. She has had candy. She has had lollipops. She has had Sprite, Coke and Orange soda. “I like tandy,” she tells us, helpfully, before meals. “I like Sprite. I like cookies. No dinner, just cookies.”

We have no routine, of course, no set rest time, no set bed time, no ability to have some meals where lengthy seatings at the table aren’t possible. And in spite of her age, Rory is young to our family, and to traveling–right now, she reads more like a 2-year-old, and a stubborn one at that. She wants to jump into the pool when there is no one to catch her, she screams in protest if my mother tells her no. “I tan DO it!’ is her favorite phrase, but when it comes to walking across a busy GZ street not holding hands–no, she can’t. Same with juggling a full glass of soda on a rocking boat. But who ever asked her to do these things before? It can’t be easy. At home, I can guarantee no more arguments about who gets to push the elevator button. All we have to do is get there…

We all are–not so much of China but of TRAVELING. They have done so well–would you believe that, throughout that entire quarantine, not one of them said I want to go, I don’t want to be here, I don’t want this food, I’m hot…seriously. Not one complaint of that kind. They got bored. They were hot. They did some whining–but no tantrums, no real demands to do what I couldn’t do, which was to get them out. They were simply stellar.

And they are still doing well. Wyatt isn’t sure what to make of Rory, who’s inclined to pit Lily against him, or lead him into hitting her–and trust me, she knows how–she’ll poke him, and hit him a little, and then when he–and I’m watching–hits back, thinking it’s a game–she starts to wail. “She hit me!”
Now, some of the time, he’s doing it on purpose when she doesn’t want it, too. It’s going to take a while for them to sort this out. It’s going to take ME a little while to sort it out. I can see them deviling each other, but if I’m not watching, I don’t know who did what, and they are both inclined to tattle, and to also be much harder and rougher on one another than Wy and Lily have been. I don’t want to favor Rory, and make Wy feel betrayed. I don’t want Rory to feel less important than Wyatt. I don’t want either of them to figure out that I’m worried about that and start playing to it.
Man, I can’t wait to get home! I’m missing EVERYBODY.