Ready to Talk About Race With Your Kids? There’s an App for That. 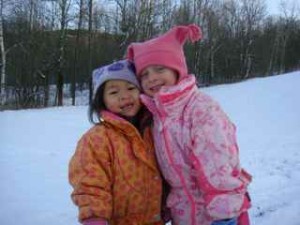 Can't tell them apart, can you?

My 6-year-old Lily came home from camp last week truly excited two girls she’d met that day. “Willow and Piper are sisters,” she explained of the identical twins. “They’re really hard to tell apart.” She thought for a minute. “Just like me and Rory.”

Colorblind. Isn’t that what we want for our kids? Complete oblivious-ness to obvious racial differences. From her comment on similarities, you’d think Lily has it (as does her sister, whose recent response to someone pointing out that Lily looks like her Daddy was to say cheerfully “and I look like my Mommy!” As you can see from the picture, Rory is Chinese, and her siblings and parents are not). As it happens, I know Lily isn’t always this immune to noticing things like skin and hair and eyes; I’ve heard her in the back seat comparing her arm to a friend’s: “look, yours is brown! Mine is kinda yellow-y.” But she’s never once asked why the same friend’s mother has skin that looks more like Lily’s than like her friend’s. I’m not sure where her inner conviction that she and Rory look alike comes from. (I’m guessing it hasn’t occurred to her yet that other people notice they ways they look different.) I have more than a little trouble believing it will last.

My parenting style, thus far, has been to embrace sensitive subjects. Sex? Explained. The guy with the “Legalize Marijuana Now” poster? Done (although I did choose to wait until we took Sam’s fellow third-grader and playdate home). Death? Covered, perhaps a little too bluntly, along with female Muslim imams and gay marriage. (Thanks, NPR!) As a kid, I felt there were things, plenty of them, that one just did not mention. And I drew my own conclusions about them, and most of those conclusions were, well, kooky at best. The truth may be scary, but it’s better than standing up on the riser during the school Christmas program, wondering if you’re really allowed to sing “Silent Night” if you’ve never been to church.

Which is why when I read Po Bronson and Ashley Merryman’s NurtureShock and their Newsweek article earlier this year, the chapters about kids and race really resonated with me. Briefly, the research Bronson and Merryman highlight show that the common parental policy of waffling about race by either not discussing it or referring to it only obliquely (“we’re all the same under our skin”) doesn’t result in colorblind kids at all. Lily’s optimism aside, they notice that people have different skin color. They notice that we don’t talk about it. And they conclude that nothing so blatantly obvious and yet so hushed can hardly be without some deeper meaning, and so kidsâ€” who are, we can see, very ready to classify themselves based on sex, sneaker color and who’s in what classroomâ€”classify. What starts out innocently enough ends in kids who pick friends who look like they do, not every time, but often enough for it to make a statistical difference. In other words, kids discriminate. Unless their parents do one seemingly simple thing: talk directly about racial differences.

It sounds easy enough, until you sit down to do it. President Obama has called for a “national conversation about race, and we all know how that’s gone. It’s not much easier at your own dinner table. Ever tried looking at your son and saying “So, have you noticed there’s only one black kid in your class?” Or possibly, “Do you know why some people are so surprised that your (asian) sister is such a good athlete?” Those are conversations even I hesitate to embark on. But fortunately, there’s an app for that.

In fact, there are two. But to hear more about them (and you should) head over to Babble.

One Response to “Ready to Talk About Race With Your Kids? There’s an App for That.”