by KJ in Have I mentioned that I have kids?, Life in a Northern Town, Raising Devils 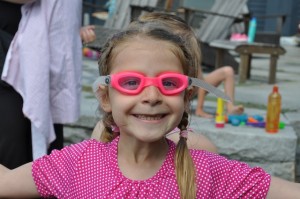 This is the birthday girl. 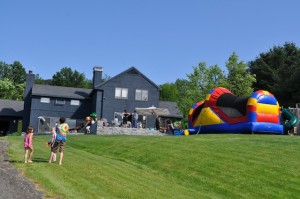 This is the party.

First of all, let me say that I angsted over this pinata. I don’t even like pinatas. I mean, I did, when I was little and lived in San Antonio, where some kids had pinatas hanging in their rooms from trips to Nuevo Laredo (in more peaceful times). Me, I had a large ceramic piggy bank I believed was decorated in traditional fashion. No one I knew had ever had a pinata to break, although we had heard of them. I kind of think I was at parties where a home-made one, of paper mache, was broken, but not a real one.

Now, of course, they’re expected at every party within 20 miles of a party store, and doesn’t that pretty much encompass the entire country?

I almost didn’t do it. But yesterday, or maybe the day before, Lily said, in reference to her Fantastic Water Party, “but what will my pinata be?”

Now, you can see the party, above. (it doubled as a massive BBQ for a bunch of friends and an end-of-school year celebration). Here are the party favors: 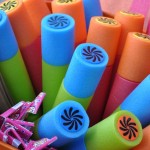 Obviously nothing more was needed. But I was at the (damn) party store, and there was this awesome luau pinata. I loved him. ANd he has huge and would hold lots of candy for all of Lily’s classmates and siblings, and I thought she might be disappointed if there was no pinata.

We hung it from a tree in back. Sam produced a bat to hit it with, which Rob confiscated, on the theory that one hit and that would end it. And Lily, who had been on the edge from the first minutes of this party extravaganza, lost it.

Mistakes were made. Truth be told, Lily does not WANT big massive parties. She thinks she does, because she gets lots of gifts, but she does not. What she really wants is for about four little girls to come over and do EXACTLY WHAT SHE WANTS for a couple of hours. Instead, everyone descended on her! With their siblings, because if you’re going to rent a giant water slide like the above, you want everyone to enjoy it! And they had water guns! And they were shooting each other! Before Lily said they could! And going in the playhouse! And not paying attention to her!

We got through that, but the pinata, with 20 kids lined up to whack it, was too much. Lily REALLY wanted to break it herself. It was never going to happen. So: 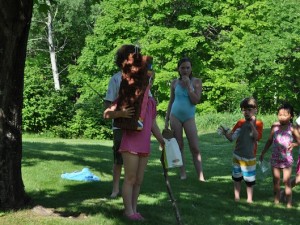 This is not a love-fest.

Lily wrapped her arms around the pinata and declared that no one could hit it. She wailed. She fell on the ground and rolled around. Shew said she had never wanted a pinata, that she hated pinatas, and that i had ruined her party by getting a pinata. As all but one of her classmates, and their brothers and sisters, stood in a line watching and waiting. One called out, helpfully, “Lily, I’m getting tired of you!”

Probably she should have been removed screaming from the whole scene. Or have no presents. Or no party next year, or–I don’t know. I have no idea. I have seen a zillion birthday tantrums. and I have never yet seen one handled right, because I have no idea what “right” is, and neither, apparently, does anyone else.

What did happen? We shamed her out of it. Someone produced a nerf bat, and she tried it, then used a stick. About ten kids later, Luau man was in pieces, and we found that all the candy dropped basically into the laps of the first five kids on the scene and no one else, including Lily, had any. There were tears. But these are gently raised kids, and there was some amazing sharing. One little boy gave Lily nearly all of his candy (I cannot imagine why). Then Lily gave some of hers to a smaller child, and all the parents stood around, shaking our heads, just glad that the whole thing seemed to be over.

Then they ate candy in the grass.

Later that night, Lily said “This was my happiest birthday ever!”

For her sake and mine, I hope she’s wrong.

2 Responses to “The Traditional Birthday Tantrum”