Because I Wish I Could Play the Piano, That’s Why!

Who doesn’t know that the true reason we drive our kids all over to activity after activity is that we ourselves wish we had had these opportunities or these skills? To be someone who, if the chance arose, would surprise everyone by, say, sitting down at the piano for a sing-a-long, executing a perfect dive into the lake, shushing down the narrowest of ski trails or jumping a horse over a fence? (Apparently I have a secret desire to be that guy from the Corona commercials: The Most Interesting Man in the World.)

I had every opportunity to become some kind of a musician as a kid. Piano? Certainly, but I quit while barely able to read the base clef. Then on to band, where I was deemed insufficiently rhythmic to play drums and had the wrong embrosure (or some word like that) for the flute, leaving me wailing away on the clarinet, all reedy and not even remotely gifted. Then choir, which I did love and did well at, although never well enough to get solo parts or musical leads. I do get to surprise people, occasionally, with my ability to hold a part while singing Dona Nobis Pacem, but it doesn’t come up often. I think the piano thing would be way cooler.

So I want the kids to have music lessons, until they’re determined to give up. (This doesn’t mean I’m good at making them practice. That’s a whole ‘nother question.) But piano lessons, as important as I think they are to basic literacy, caused us no end of problems. It was always everyone, in the car, after school, going to hang out in a church or a rainy playground outside a school, except for the brief period last fall when things fell together to allow the kids who weren’t playing to do an art class at the same time. Massive melt-downs came in the car on the way to or from piano lessons. Piano lessons didn’t give anyone the physical work out they needed after a day of school.

And then I found the lovely Damaris. Damaris says, in essence, that she can teach any instrument well enough to keep up with a beginner. She’s suzuki for piano AND violin, and more than happy to branch out, for Sam, into anything his heart desires. Andâ€”this is the kickerâ€”she will come to our house. That’s how music lessons happened when I was a kid. The piano teacher drove up, parked at the curb and came inside. But here in the land of twenty-minute travel times and far-more-students-than-teachers, that’s been impossible to find: until now. So, if you’re not having a lesson? Hey, you can do whatever you’d like. You could even have a friend over and just leave the friend to play with a sibling for a while. Snacks? Got em! Sleepy? Take a nap! Tantrum? Go to your room! I love this.

So, today, we began. 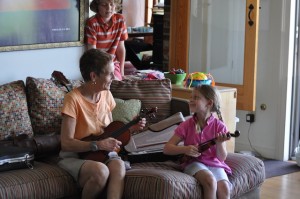 Lily can learn violin with a group at school next year if she still wants to. This way, she’ll be ready. 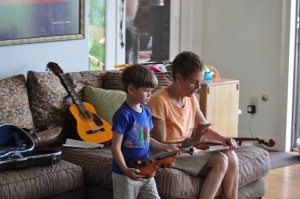 Wyatt has honestly wanted to fiddle for years (thanks, Devil Went Down to Georgia, among other things). And frankly I love the fiddle. But right now, he’s settling for working to play “Poor Old Michael Finnegan” in the hope of playing it at a school concert next year, just like his much-admired older friend Riley. 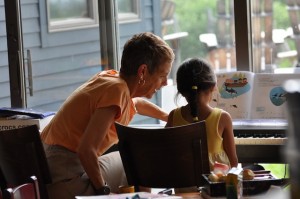 Rory has had five piano lessons and learned where the white and black keys are. After all the lessons were done, Damaris came to me. “Rory,” she said, “really wants to play the piano. Her way.”

“Is that usual for her? Does she like to do things her way?”

And then she assured me that she loves fierce determination, and I believed her. You either love Rory or you can’t wait for her to go be in someone else’s class, and that’s all there is to it. I thought they’d click. I think they will. 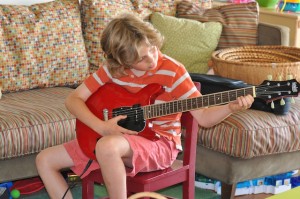 They told me the electric guitar worked with headphones.

And then Sam. Sam, who after two years of piano mastered a few things. Who loves to sing. But does not love to practice anything. Sam was a little hesitant about approaching another instrument. “Just for the summer,” I said. Now that he’s plugged it in, he’s at least temporarily in love. But he also wants to know if he can try out the sax. Damaris says hey, she’ll split his half hour in half and he can try that too.

Thanks to the magic of instrument rentals, I can say: Why not?

I cannot tell you how happy I am not to have to drive anyone to any music lessons this summer. There aren’t words.

One Response to “Because I Wish I Could Play the Piano, That’s Why!”