Who, Exactly, Makes Me Mad?

It should have been a perfect afternoon.

Rainy first day out of school, end of last week, but some brilliant parent has scheduled a birthday party, not outside (as suckers like me invariably do for June birthdays) but indoors, at the aquatic center. I figure I am guaranteed happy children, because generally the aquatic center is the biggest of treats for them, and we’ve reached the point where I don’t even have to get in the pool. I’m toting my laptop and a couple of magazines. The kids are toting goggles and excitement. 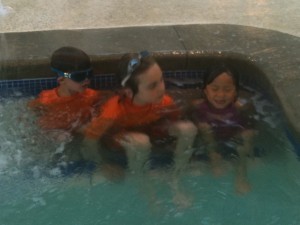 I toss them all into the pool and settle in on a bench a few feet away, where I happily go through my bag and chat with other parents until a lifeguard looms up.

“Miss? Your little girl is really struggling in the water. I just had to pull her out. So let’s keep an eye on her, okay?”

I look up from reading my email on my phone. I’ve already given up the laptop as a bad job, I can’t get it to hook up to the aquatic center’s wi-fi, and this, because it means two hours that I’d meant to spend on work and online miscellany won’t happen, is snarl-making news. So I’m pretty much loaded for bear.

He points. At Rory, all right.

“Really? She doesn’t have any trouble swimming.”

“Did the lifeguard have to help you?”

She shakes her head.

“Did you need help?”

I watch a while longer, and realize what his problem is. Rory likes to go in the lazy river, fight the current for a while and then give in to it and swim to the side. She does all of this with a look of grim death on her face. (This is a very apt metaphor for how she faces life.) One of her foster home hangovers is the look of desperation she invariably sports while exerting effort; I’m sure it scored her attention and help when she needed it. But she doesn’t need it in the pool, or even want it.

She makes her way around the river again with a pause on a small sort of landing you can sit on in the middle, where she behaves as a child who needs to pee, so I return to the edge of pool; i want to fish her out and take her to the potty. She says she does not have to go. I say she does, and the lifeguard reappears. He is not done with us yet. She still looks frightened, he says. She shouldn’t be in the lazy river unless she’s with someone.

Sam is playing with Wyatt. I am not wearing a swimsuit (on purpose, there is nowhere I less want to be than this lazy river. If Rory hasn’t peed in it yet, well, I guarantee one of these kids has).

I argue. She’s fine, I say. It’s just the way she looks when she swims. That’s one of the three signs of a kid in distress, he declares. If she looks like that, she’s distracting all my lifeguards from doing their jobs, because they are all watching her. Even if she’s fine, some other kid could get hurt while we focus on her. She just looks like that, I explain again. It’s an attention-getting tactic.

Rory continues her potty dance and I reach in and insistently pull her out. As I do, he produces: a baby life jacket.

Now, Rory likes life jackets. I do too, they’re fun to play in and why not? But she’s heard what he said. She doesn’t want a life jacket. I try, angrily, to put it on her anyway. You have to wear it, I say, or you can’t be in the river part. NO NO NO! I DON”T LIKE IT!

She storms off. I follow. Wrap her in her towel. She pulls it off and jerks out of my arms. We repeat, until I insist, wrapping her like a sausage. She is wailing. I am trying to explain. You can’t look so worried, I say. I know you’re just doing that but he doesn’t. You can’t swim against the water. You just have to swim along. You can’t fight against it.

She’s screaming and pushing me away, and seriously, what am I doing? What part of that would she really comprehend? Why is this her fault? And Rory is a FISH. She swam from the moment we put her in the pool. She knows how to roll onto her back to swim any time she needs to, doesn’t mind a full splash of water right in the face, and loves, loves, loves the water.

I change tactics. This is not me, I remind her. It’s him. It’s the lifeguard. Maybe if YOU tell him you don’t need help and you will try not to look so worried. Maybe I can’t fix this but you can! Let’s go tell him together.

Uncomprehending sobs, and I am getting angrier and angrier. I’m sorry, I tell her. This isn’t fair. I know you can swim. He doesn’t. He’s mean and I’m sorry.

Rory calms down enough to eat pizza and cake with the birthday party (of a friend of Lily’s, with kind parents who shared the food) and when we come out, that lifeguard is gone.

I point this out to her. I don’t even care what she’s learning at this point. Get back in, I say, and stiffly, she does. She sits. You can swim, I say, but she doesn’t want to. She stares at the lifeguard. She looks so grieved. I lean over, again. I’m not mad at YOU, I tell her. I was never mad at you. I was mad at him.

This makes her feel better and she does some swimming. I hover right over her, eyes on her at all times, now! I don’t want them to have an excuse to take her out again.

Thinking about it, I realize that was probably the problem all along: I wasn’t hovering. That lifeguard felt like I, who’d come in with six kids, wasn’t doing my bit. I wasn’t watching them as closely as he thought I should; in fact, I wasn’t watching them at all, and at one point I even went out to talk to the person at the desk in the lobby about the wi-fi. That was clearly not his idea of good mother behavior, even with five swimming kids (the sixth one’s mom appeared shortly after she came in with us). And Rory’s expression gave him a good excuse to show me just how wrong I was and what a crappy job I was indeed doing.

Poor Rory was swimming with one eye on the lifeguard. When another appeared too close to her, she let go of the side and began doing this wild dog paddle with a huge, fake smile on her face. The lifeguard looked at her as if she were mad.

Another parent appeared and commented on her excellent swimming, and I described what had happened. “Him, right?” Apparently our lifeguard was known for his power trips.

I stood by the side of that damn lazy river for an hour and fifteen minutes. Eventually, he came up and half-apologized. “She does just kind of look desperate when she swims. doesn’t she?” he said. I just nodded. 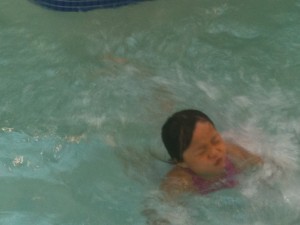 When Rory got out again, I made it a funny story. I wasn’t mad at you, I was mad at the lifeguard! And he didn’t understand that you can swim! Because he’s mean! We left on an okay note, but I’ll bet she doesn’t want to go back there for a long time. And neither do I. 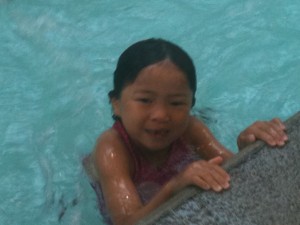 It took me forever to capture her freaky swimming face, because whenever she saw the camera, she did this.

2 Responses to “Who, Exactly, Makes Me Mad?”