Ok, Iâ€™m making a vow I probably wonâ€™t keep in honor of our vacation in France, generally considered a relatively hedonistic country and one where people, and especially women, know how to put themselves first. Have you ever read an old school French feminist on the subject of attachment parenting? Itâ€™s, um, refreshing.

My vow: Iâ€™m going to stop martyring myself in the name of everyone elseâ€™s fun. 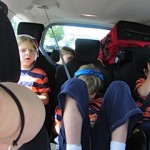 We were just a tad packed into the very European minivan.

What do I mean? Well, how about yesterdayâ€™s lunch. We had a long drive from the airport in Barcelona to Cazo on top of a long flight, and I thought a stop somewhere interesting with plenty of room to roam and eat a good lunch would be perfect. For various reasons, I probably wasnâ€™t rightâ€”but I thought a lot about what we should do each day, and came up with the plans, and I, at least, should enjoy them.

Collioure, at first glance (and second, and third, since finding a parking place looked a lot like Chevy Chase trying to get out of a London roundabout) looked perfect. Itâ€™s got a stunning fortress that dates, in different parts, from the 13th to the 17th century. A small, uncrowded playground next to an outdoor cafÃ© that had seats for us and looked out over a perfect beach scene that had inspired many an impressionist. The cafÃ© had sangria. It had frites. It had crepes. 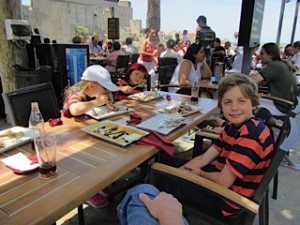 But Rob did not like the cafÃ©. He wanted a sandwich, and they werenâ€™t serving sandwiches. (He also wanted eight hours sleep, preferably not sitting in a non-reclining coach seat, but they werenâ€™t serving that, either.) He was bothered because the bike shop where we rent bikes in St. Chinian would be closed when we got there and, with typical French erratic opening hours, he had no idea when (or if) it would be open Saturday. And he had had to drive the three hours from Barcelona to Coullioure (which should have been two hours, but there was traffic) and would now have to drive the two more hours to Cazo fueled by the crappy mocha Iâ€™d brought him while he waited in line for the rental car, which was the wrong rental car, and which locked and unlocked its doors with disturbing regularity.

In other words, so not about the cafÃ©. But because Rob wanted a sandwich and couldnâ€™t get one, and because he felt rushed I ordered only crepes for the kids instead of frites and meals. He ordered a Coke instead of a sangria (which was a seriously good choice for a sleepy driver) and so I did too. And he refused an (unhealthy, probably not even that good) crepe. And so I did too.

And the kidsâ€™ crepes appeared, and they looked pretty darn tasty, and I was hungry, and I thought, the hell with that, and ordered one for me, too. But I couldn’t really enjoy it. And I never really managed to enjoy what has to be one of the prettiest towns in France, even walking through the castle or down the beach–I was too hyper-aware of whether anyone else was having a good time. 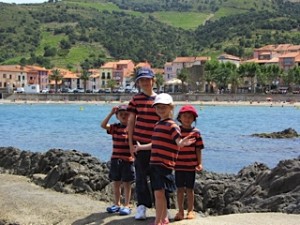 They're pretty clearly having a good time, aren't they? 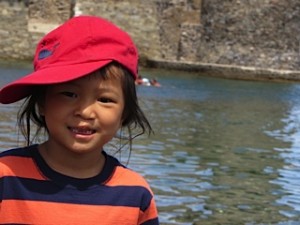 Having an especially good time. Probably because her feet are in the water. 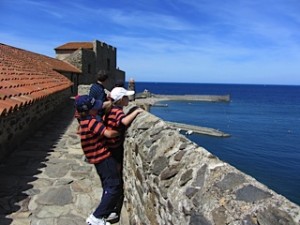 Was I crazy? Look at that good time!

Then, on the way out, we stopped for soft drinks. I chose a lemon Fanta, which I was pretty excited about, and so did Lily. But she lost hers between the parking lot and the car, and so I gave her mine.

And there it isâ€”the martyring thing. The long-suffering oh-here-you-take-it-i-will-just-go-without or not-go or whatever that comes of a sorry mix of thinking everyone elseâ€™s happiness is more important than yours and wanting everyone to think you think their happiness is more important than yours. Because Robâ€™s grump wasnâ€™t improved or lessened by my absorbing some of it. And Lilyâ€”well, of all the kids that I shouldnâ€™t do that for, sheâ€™s number one, she essentially takes your Fanta and asks if she can have your cookie, too, because sheâ€™s sat on hers, and your pony, because hers is the wrong color and nobody ever gives her anything.

I hate martyrs, and I hate myself for falling into that role. Someone who really puts the ones she loves first doesnâ€™t do it at her own expense, because they love her too, and donâ€™t actually want to attempt to enjoy their Fanta with a sighing martyr eying it wistfully (again, Lily may be the exception to this rule). Grumps have to get past their grump without corrupting others, and if they can, they win (because otherwise that infected grump may just pass it right back.

Iâ€™m not going to martyr myself to anyone for the rest of this trip. Iâ€™ve planned stuff, and some of it is for me, and those will NOT be the first things to go. I will eat the desserts and gelatos I choose and not give them to a child who chose poorly unless I genuinely prefer that childâ€™s choice. Iâ€™m going to have fun on family terms and on my terms. 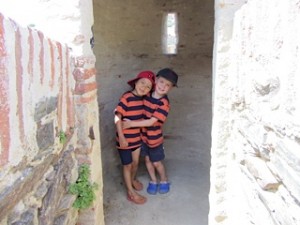 2 Responses to “The Martyr Effect”