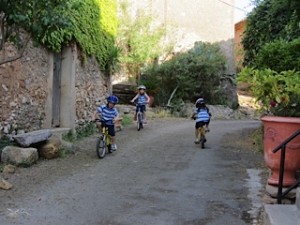 The bike shop in St. Chinian where we rent our bikes is a very small bike shop.

And in France, they take their biking very seriously. So it is a small and serious bike shop.

Which means we were able to rent bikes for me, Rob andâ€”barelyâ€”for Sam, but not for anyone else. This is what comes of vacationing in a place where, at least from the place’s perspective, no one in her right mind would vacation, but it was fine. We didn’t expect to have bikes for the kids.

And then fate, in the form of one of the neighbors in the other three occupied houses in the hamlet, intervened. We have bicycles for our grandchildren when they visit, she said. Would your kids like to borrow them while you are here? 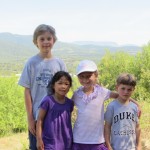 She made the offer as she hiked with us down into the village for the weekly market, and excitement was so rife that I had a terrible time, on our return, preventing the kids from storming her home at lunchtime in the hopes of getting their hands on some bikes. (You don’t interrupt lunch in France!)

About an hour later, after a horrible battle over whether Lily or Rory would get to use the pink “Princess” helmet provided along with two more generic options (Lily decided to give it to Rory at precisely the moment that I convinced Rory that it was stupid and for babies…), all three were outfitted with bikes.

Of course, Wyatt and Rory only learned to ride a week ago, and that on a lovely, smooth, flat playground surface. As you can see, none of those words describe the driveways or goat paths of Cazo. 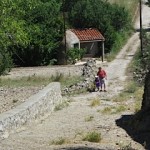 But they had bikes. Bikes they’d never expected to have (and Lily, in particular, who longs to be a big kid like Sam, had been very bummed at that). And they fiercely, determinedly, threw their legs over them and rode. It wasn’t so much the riding, really. It was the stopping. Their bikes at home have coaster brakes. These had handlebar breaks. Rory shot down the steep drive heading for the road, where I was, and clearly forgot entirely what to do. Her next stop was going to be over a rough edge and down a small ravine, or right into a giant cactus–but when I screamed “Handles! BRAKES ON HANDLES SQUEEZE THE HANDLES!” she managed to listen. And squeeze. I was so impressed. SHe still wrecked, but it wasn’t anything an ice cream bar couldn’t fix.

Rory, totally getting it. I think she's standing up on the pedals.

And from then on out, she totally got it. She handled that bike like a pro. 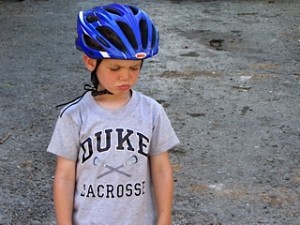 It was just harder for him. Rory has astonishing balance, and it probably doesn’t hurt that she weighs next to nothing. She’s always been coordinated. Wyatt has strength and endurance and the ability to out-throw her and possibly out-run her, but the bike was big and heavy and the ground was rocky and the brakes were wrong and…sniffle.

But he couldn’t get around the fact that Rory was doing it. Therefore it must be doable. So he got on again. 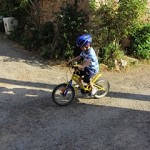 Lily, likewise, was spurred to greater achievement by Rory’s prowess. 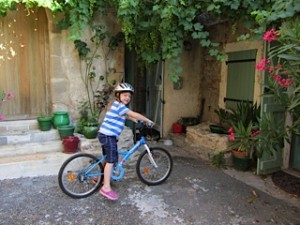 Note that this is a "pretty" bike.

At home she has a tendency to walk on hills (both up and down) and to resist long rides, but with Rory cranking away at the pedals, she stepped up. And suddenly, we were family biking city.

I don’t know how long this will last. I suspect that when your parents do something avidly, there are two general reactions: the “no, never, I don’t want to” and the “Let me at that!” My parents played tennis, and I went the other way, although I don’t remember why. I wanted nothing to do with tennis. I was not good, I was not interested, there were many, many things I would rather do. (I still kind of feel that way, although I wish I’d taken more interest at the time.) So I wonder–will they all keep wanting to bike? Are there pedaling vacations in our future? Or will one of them (I bet I know who) be the determined hold-out, just to distinguish itself from the rest? 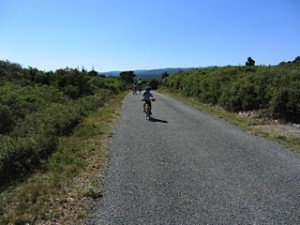 Look at them, riding away!

And then, with a ride all the way to the next village (5 miles, maybe) on the fantastically paved tiny back roads of France (the little road in Cazo is a goat path. If it were a road, and someone–anyone–lived on it, it would be paved. Because that is how they do it in France), we managed this shot. All together, all happy, all biking. Long may it last. 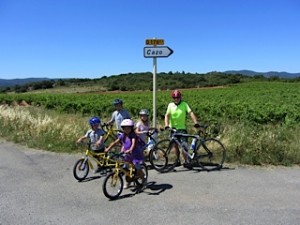