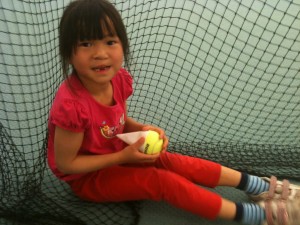 You can be perfectly happy trapped in your net, but...

I’ve been re-reading some old blog and journal entries from our first weeks home with Rory. Mostly, I’m seeing how amazingly far we’ve come (and how painful it was to get there). But then there was this, taken from an incident just two months after we came home from China. (Because of her foster home, Rory spoke some basic English when she first arrived.)

I decided to make Rice Krispie Treats with Wyatt.
I read Rory a book first. When Wy ran to get the cereal, she strode confidently into the kitchen.
â€œI help too!â€
â€œNo, this is Wyattâ€™s job. You can help with dinner.â€
â€œBut I help too! I wanâ€™ do butter!â€
â€œNo, Wyatt is going to butter the pan. Wyatt is going to put the marshmallows in. I will give you a marshmallow to taste, but this is Wyattâ€™s job.â€
Rory wasnâ€™t happy. She wasnâ€™t happy while Wyatt dropped butter into the pan to melt. She wasnâ€™t happy when Wyatt added the first bag of marshmallows. She wasnâ€™t happy when he got to hold the wooden spoon, and at that point, I turned her firmly around and walked her out of the kitchen and around to a seat on a barstool.
â€œYou can watch,â€ I said. â€œBut you have to stop asking to help. This is Wyattâ€™s time.â€
She pulled in a deep breath and I put a hand over her mouth.
â€œAnd if you start to cry or scream, you have to go upstairs. This is Wyattâ€™s time. When we are done, you can help make dinner, and Wyatt wonâ€™t help.â€
A long moment passed, me with my hand over Roryâ€™s mouth and Rory glaring at me above my fingers. I removed my hand and waited. If she started to scream, Wyattâ€™s â€œtimeâ€ was over: Iâ€™d have to drag her upstairs, put her in her room, hold the door shut and go through the entire tantrum ritual. By the time we were done weâ€™d be lucky if I had time to cook dinner, let alone finish the Rice Krispie Treats.
Instead, she nodded. I went back to Wyatt, so happy I handed him six mini marshmallows and gave as many to Rory. We were on! We were making Rice Krispie Treats, just like in the old days! Wyatt began to stir.
â€œIs I good girl, Mommy?â€
â€œYes, youâ€™re a very good girl. Wyatt, get the spoon down toâ€”â€œ
â€œI very patient.â€
â€œYes, youâ€™re very patient. Get the spoon all the way down to the bottom andâ€”â€œ
â€œI good patient girl?â€
â€œYes. Keep stirring, Wyatt.â€
â€œIs you done yet?â€
â€œNo. Ok, letâ€™s add the next bag of marshmallows.â€
â€œIs my turn yet?â€
â€œNo. Here, let me help with the bagâ€¦â€
And so on. Yes, she was patient. Yes, she was a good girl. Yes, she would get a turn next. Yes, she would help with dinner. Wyatt never said much at all. I made dinner, with Roryâ€™s â€œhelp,â€ and then I locked myself in the bathroom for half an hour.

I read that with disbeliefâ€”because Wyatt and I made Rice Krispie treats yesterday, andâ€”minus the initial teetering on the edge of tantrumâ€”I could have written that fresh today.

Rory and I have fallen into a pattern. One of my favorite writers, Sarah Susanka, says “a conditioned pattern is a set of actions and responses that you’ve set to replay on automatic because it worked for you once a long time ago … and you’ve continued to replay the same pattern every time the circumstances arise ever since.” She says these patterns come from our hidden beliefs: in Rory’s case, that if I’m not constantly acknowledging her presence, I’ll forget her, and in mine, that I need to respect that need of hers even when it’s to Wyatt and my detriment.

This isn’t our only similar pattern. I’ve found a couple areas in which Rory and I are still sayingâ€”-to the wordâ€”-the exact same things we were saying to each other two years ago. I thought we’d come so far–but it one particular area, that of Rory competing for my attention–we’re still very much trapped. And it’s not good for either of us. I’m getting more and more impatient in my responses, and Rory is getting more and more desperate in her attempts.

And–this is key–I can’t change Rory’s behavior. I can only change me, and hope that my change helps her change. So, what am I going to do, the next time she goes with her frontal assault on my interactions with a sibling? I have a couple of ideas.

I’ve tried getting it out in the open (I’ve been aware of this as an issue, just not how long ago it started and how precisely, eerily similar our conversations are). “I love you so much, Rory,” I say, “But I’m reading with Lily now.” Or even “I know it’s hard for you to see me work with Sam and not you, but I will work with you when I am doneâ€”IF you don’t say anything else while I work with Sam.”

That last one works–sort of. In that circumstance, she’ll stand there, as close to us as possible, without speaking. Told to stand somewhere else, she stands on the edge of wherever she’s supposed to be. In other words, she does as much as she possibly can of her pattern unless specifically, in so many words, required not to–to the point where giving her the instruction to get her out of the way is as time-consuming and attention-getting as, well, she wants.

I’m writing those off as failures. Here’s my current plan: I’ll ask her to do something for me. Something that should take her a long time. Something that should get her brain doing something else during the tough moments when she’s not in what she perceives as the inner circle of my attention. But it can’t always be the same thing. In other words, this is going to be a pain in my ass for a while. But two years of agreeing that she’s a good, patient girl–when really she’s NOT–aren’t good for either of us. This is a pattern we’ve got to break free of.

I’m welcoming any other ideas!

Cross-posted to No Hands But Ours.

7 Responses to “The Pattern Trap”